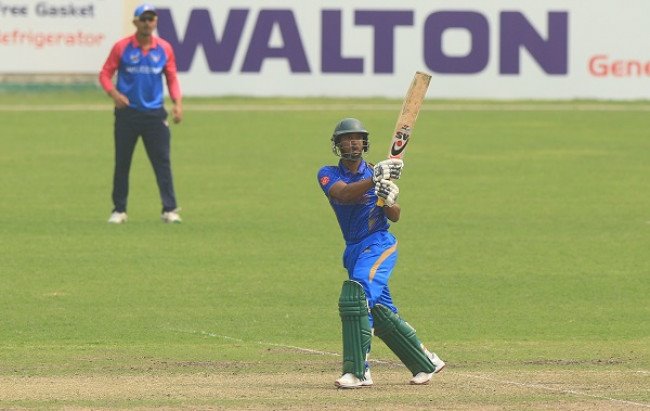 Legends of Rupganj took the solo lead in Dhaka Premier League (DPL) point table, making their high-voltage clash against Abahani Limited a one-sided contest as they crushed the defending champions by six wickets at the Sher-e-Bangla National Cricket Stadium on Sunday.

Their bowlers paved the way for the one-sided victory, wrapping Abahani up for paltry 122 in just 39.1 overs and thereafter their batsmen made little toil too reach the winning mark with 125-4 in just 26.5 overs.

Skipper Mosaddek Hossain Saikat battled lonely with 40 not out while Mohammad Mithun scored 38.

Subashis Roy dealt a massive blow, rattling the stump of in-form opener Jahurul Islam, whose good run-of-form so far was key in covering Abahani’s vulnerable middle-order. However Jahurul’s early dismissal exposed the middle order and they failed to pay off as it mattered most.

Subashis got Nazmul Hossain Shanto (6) and Soumya Sarkar (14) to leave Abahani 21-3 in ninth over. Mohammad Shahid then appeared into the stage to take the wicket of Indian recruit Priank Kirit Panchal (1)  and Sabbir Rahman (0) as Abahani were reduced to embarrassing 29-5.

A new low was on the cards given the way the Rupganj bowlers were bowling. However Mithun and Mosaddek resisted and added 43-run for the sixth wicket to ensure that Abahani wouldn’t hit new lowest total.

Mithun looked to regain his form but Nabil Samad’s arm-ball did the trick to get the better of him, leaving Mosaddek alone to take the side to a strong total.

However Abahani’s lower order fell like a pack of cards and Mosaddek was left stranded in the crease.

When Abahani batsmen struggled to get the rhythm, Rupganj openers Mehedi Maruf and Mohammad Naim batted with ease in the same wicket. At one phase they seemed to have inflicted more embarrassment to Abahani by overhauling the target with all 10-wicket intact.

Saifuddin claimed the wicket of Mohammad Naim for 22 to end the 62-run opening stand. Mehedi Maruf and Mominul Haque further shared 45-run to take the side on the verge of the victory before Abahani claimed three wickets for just four runs. Given a paltry target, it mattered little as Shahriar Nafees fittingly sealed the deal with a mid-wicket boundary off Sabbir Rahman.

Mehedi Maruf was the highest scorer for the side with 59 off 85, hitting seven fours and one six. Mominul Haque scored 17.

The victory propelled Rupganj top of the point table with 18 points from 10 games while Abahani went down to second spot with 16 points from same matches.