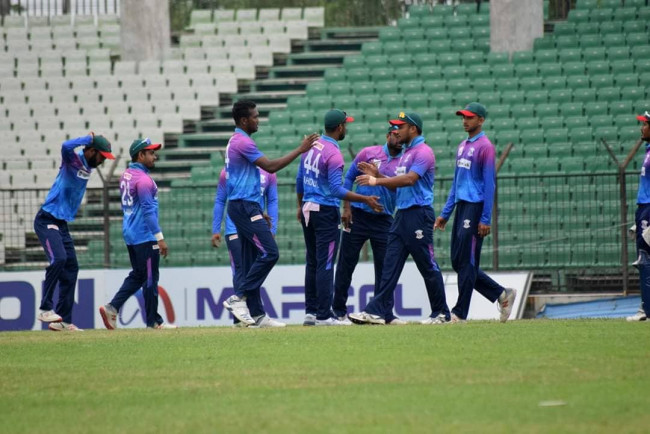 While Prime Bank Cricket Club found their destructive best after an upset defeat in the previous game, Gazi Group Cricketers kept up their Super League hopes alive as they won their respective matches at different venues across the city on Friday.

Prime Bank Cricket Club bounced back into the winning-way in style, having registered the second biggest victory of the DPL’s history when they crushed BKSP by 172 runs at the Khan Shaheb Osman Ali Stadium.

The hapless BKSP was skittled out for just 50 in 22 overs, the fifth lowest total of the Bangladesh’s List A cricket history, in the face of a devastating bowling from pacer Al-Amin Hossain after Prime Bank put on 222-8 in their 50-over allocation.

A strong contender of the title, Prime Bank suffered an upset 48-run defeat to Shinepukur Cricket Club by D/L method in the previous game but they were keen to prove that the defeat was just a one-off incident.

National discard Al-Amin Hossain led the way with 5-20, his fourth five-for in the List A cricket as BKSP found them in wanting right from the start.

He began his party with a double strike in his just first overs as he removed opener Prantik Nawroz Nabil (2) and Aminul Islam (0). In a gem of pace bowling Al-Amin again kept BKSP in cornered situation and scalped two more wickets in his third and fourth over to leave the opponent at jittery 17-4.

But his hunger for wicket didn’t diminish for a single moment. Al-Amin later added one more wicket to complete his five-for before Abdur Razzak and Nayeem Hasan took the care of the BKSP lower order.

Nayeem ended with 2-6 while Razzak and Monir Hossain scalped one wicket apiece.

Parvez Hossain Emon was the only batsman of BKSP to cross double digit figure, scoring 15, which was the reason that BSKP avoided the shamble of DPL’s biggest defeat.

Electing to bat first, Prime Bank also didn’t have great start as they were reduced to 24-2 before their Indian recruit Abhimanyu Easwaran came up with resistance.

While he resisted with some classical batting, Prime Bank’s middle order continued fumbling until Nahidul Islam came up with some support for Easwaran. Together they shared 74-run for the sixth wicket to pave the platform of taking the side past 200 runs.

Eawaran hit two fours and one six in his 109 ball-92 while Nahidul struck 50 off 70 with one four and three sixes.

Put into bat first first, Gazi Group were bowled out for a mediocre 206 in 49.4 overs before Nasum’s spin magic helped the side bundle Brothers out for 197 in 48.5 overs.

Thanks to opener Junaid Siddiqu’s 72 runs knock Brothers kept them in the hunt at most part of the chase until Nasum came up with fire. Junaid and Fazle Mahmud kept the side outright favourite to win the game when they shared 97-run for the second wicket stand after opener Mizanur was dismissed for 25.

Fazle Mahmud was out on 31, leaving the side at strong 136-2. With just 71 runs to win, Brothers were strangled by Nasum who made inroads as regular interval.

As he was on song, Brothers lost rest eight wickets for just 66 runs to give up the match.

Nasum’s five-for was complemented by his fellow spinner Sanjit Saha’s 3-45.

Apart from opener Mahedi Hasan, none of the top-order batsmen of Gazi Group could stand tall, leaving the side at 92-6. Mahedi alone made 48 .

However Gazi found hopes in Pakistan recruit Kamran Ghulam, the No.7 batsman who struck 81 off 101 with 10 fours and two sixes to help the side propel past 200. His innings however proved to decisive at the end.