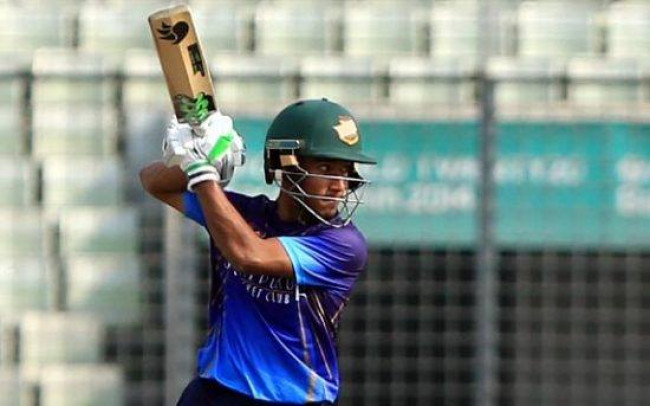 An all-round performance of Delwar Hossain who claimed 5-46 and hammered a 19 ball-34 helped Shinepukur Cricket Club stun Mohammedan by two wickets in a high-scoring thriller at the Sher-e-Bangla National Cricket Stadium on Friday.

Mohammedan seemed to have won the game with ease after piling up 324 before being all out in 49.3 overs. Shinepukur however stayed upbeat and finally gunned down the total with just two ball to spare, making 325-8.

The victory gave Shinepukur 9 points in 9 matches, taking them to fifth spot in DPL, which raised their hope to seal the Super League. Top six teams will play the Super League after the completion of the group phase. Mohammedan have 8 points in 9 games after this defeat, meaning they need to win rest of the two matches and wait for the outcome of the other matches.

Surprisingly no one could from either side hit century in a game where 649 runs were scored. Shinepukur’s Afif Hossain was the highest scorer in the game with 86 ball-97, smashing four fours and five sixes, an innings that led Shinepukur’s stunning victory.

In pursuit of big chase, Shinepkur lost two openers-Shadman Islam (21) and Sabbir Hossain (17) with the scoreboard reading 43. Unmukt Chand first made the genuine resistance, hitting a 51 ball-49 after which Afif took the onus.

While Afif kept the asking run-rate under control, there were significant contributions from the lower order batsman. No.8 Amite Hasan made 43, No. 9 Sohrawardid Shuvo and No. 10 Delwar Hossain scored identical 34 to help the side gun down such a big total. Delwar’s 34, featuring one fours and three sixes was significant particularly, given that his innings sailed the side home where there was slim hopes, with Shinepukur reeling to 261-7 in 44th overs.

Put into bat first, four batsmen of Mohammedan scored half-century to help the side put up a big total which looked enough to win the game.

Opener Liton Das struck 84, his fellow opener Irfan Shukkor contributed 50 as they shared 101 for the opening stand to give the side a solid start. Avishek Mitra also made 50 while Raqibul Hasan blasted a whirlwind 48 ball-74 with 11 fours and a six. Sohag Gazo hammered 22 ball-45 with three fours and as many sixes.