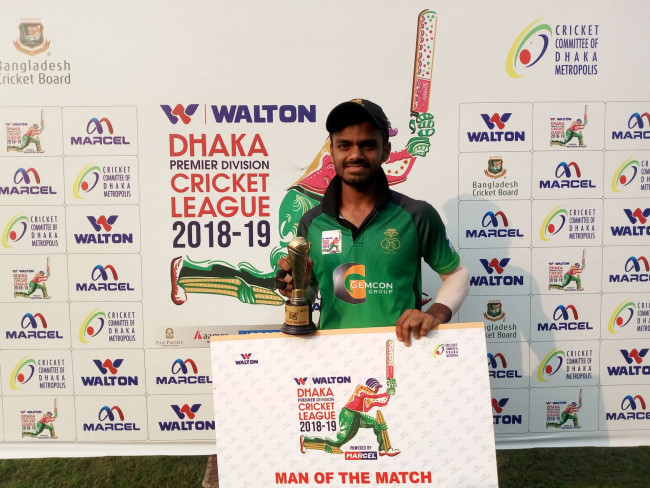 Legends of Rupganj kept Abahani in pressure by going neck-to-neck while Khelaghar Samaj Kallayan Samity raised hope of preventing them from being relegated in the Dhaka Premier League (DPL) at different venues across the city on Thursday.

Both Abahani and Rupganj now have 16 points from nine games but the Rupganj were in second position by virtue of net-run-rate.

Rupganj bowlers paved the side’s facile victory after wrapping up Sheikh Jamal’s innings for just 141 in 43.2 overs. Mohammad Naim struck 63 and Mominul Haque was unbeaten on 60 to complement the bowlers’ job as Rupganj reached the winning target with 145-2 in just 28.4 overs.

After Mehedy Maruf was dismissed for 12, leaving Rupganj 32-1, Mominul and Naim shared 96-run for the second wicket stand to make the match a one-way traffic. Naim smacked eight fours in his 69 ball-63 before being removed by Elias Sunny.

Mominul who clobbered nine fours in his 75 ball-60 not out left the ground after helping the side win it dominatingly. Naeem Islam was not out on 8.

Left-arm spinner Nabil Samad and pacer Muktar Ali snapped up three wickets apiece for Rupganj to dismantale Shiekh Jamal, who found them in wanting to make it super league spot. They have just eight points in nine games so far. They not only need to win the rest of the two matches but also would have rely on the result of other team should they want to keep them in top six teams.

Tanbir Hyder was the highest scorer for them with 35. Opener Fardeen Hasan made 28 while captain Nurul Hasan Sohan scored 25.

Ankan’s knock was complemented by opener Shahriar Komol’s 56 as Khelaghar piled up 257-4 in 50 overs after which their bowlers held Uttara back to 218-9 in 50-over allocation.

Komol and his fellow opener Roibul Islam Robi gave the side a solid start, sharing 98 runs, standing on which Ankon plundered the Uttara bowlers in all corners to help the side compile a strong total. Captain Amit Mojumder was the other notable contributor with 41.

Moheminul also batted with utmost confidence and scored 93 off 127, missing a well-deserved ton by seven runs but he got hardly any support from the other batsmen. Minhajul Abedin scored 37 to help him to some extent but it was inadequate to drive the side home.