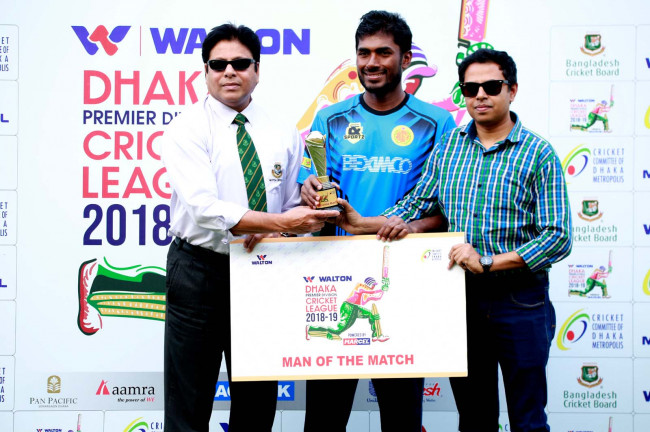 Former national wicket-keeper batsman Jahurul Islam is certainly proving that he is coming of age in the ongoing Dhaka Premier League.

The way he is batting not only helped Abahani Limited firmly placed at the top of the table in the DPL but at the same time proved that he had all the appetite to take him at the pinnacle of success.

Jahurul is the leading scorer of the tournament after the eighth-round of the league making 522 runs with a scintillating average of 87.00 that was developed on the back of two centuries and two half centuries.

‘’I cannot say that I am passing my best time,’’ Jahurul told reporters after guiding Abahani to a four-wicket win on the back of unbeaten 91 runs against Prime Dholeswar Sporting Club at SBNS on Thursday.

‘’I am playing for a long time so naturally my team does have some expectations about me. Experience players are expected to be match winners,’’ he said.

‘’After playing for so long it is normal that if I am carrying some good form than I have to score bulk of the runs. Every player don’t score in a tournament and those who are scoring need to carry on as some players might have some lean patch at any particular tournament and if we can score runs than it will help those players to regain their form,’’ he said.

Jahurul, who made his first-class debut as a 16-year old in 2002-03, was touted as a teenage prodigy with the potential of future Bangladesh captain,

He had to wait another eight years for a Test debut, against England in 2010. Although he had become a domestic stalwart by then, he could only play a total of 24 matches for Bangladesh across all formats.

Injury played a big part behind not letting him flourish to his potential over the last couple of years and coupled by his daughter illness he only turned out to be a lost soul.

Though birth of his son is looked upon as something that brought him back into track but it was never without being in companion of injury and that too when he looks to be on song.

‘’Whenever I am passing good time somehow I get injured at certain point during that phase. I was performing well in BCL but my wrist was broken nine days before the BPL,’’ said Jahurul.

‘’Later due to wrong medical assessment I played four matches but later found out that I still had fracture in my hand and so I had to opt for plaster and opened it[ plaster] only nine days before the league,’’ he said adding that he was well prepared to play keeping in mind that his shots are limited.

‘’I was not thinking of performing in the league rather I was busy working on my basics. I cannot lose temperament because my shots are limited due to the injury that I sustained in my wrist,’’ he added.

‘’I will keep dreaming of playing in the national team till the last day of my career,’’ said Jahurul.

‘’I think those who are playing at the top-order are certainly the best players of the country. They are good players due to their skill and so they are doing well,’’ he concluded without elaborating just to let everyone know that he is keeping an eye on his rivals in the Tigers dressing room.