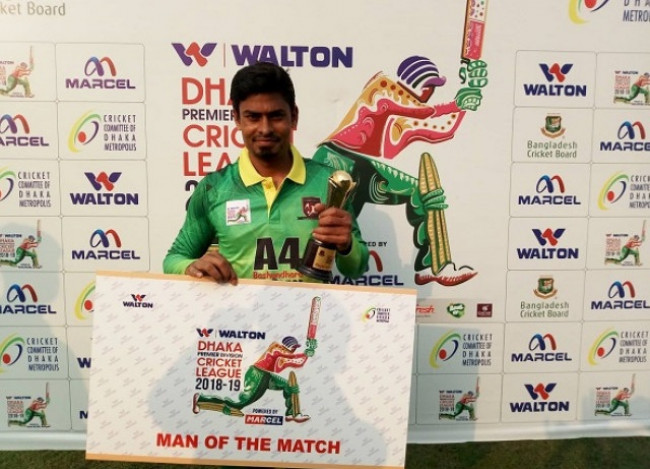 ||CF Correspondent||
The much-hyped Dhaka Premier League (DPL) match between Legends of Rupganj and Prime Doleshwar didn’t live up to the billings as the former clinched an effortless victory to make it mismatch while Sheikh Jamal Dhanmondi Club, the DPL T20 champions found to have winning-formula, after registering their fourth consecutive victory with five-wicket win over Khelaghar Samaj Kallayan Samity on Frid
ay.

While the match was considered as high-voltage clash, pace bowler Mohammad Shahid made it mismatch, helping Legends of Rupganj crush Prime Doleshwar Sporting Club by 72 runs to bolster their position in the point table of DPL at Sher-e-Bangla National Cricket Stadium.

Shahid delivered his career-best 4-23 to wrap up Prime Doleshwar for 193 in 46 overs, after Legends of Rupganj compiled a respectable 265-9 in the stipulated 50 overs.

By virtue of this victory, Legends of Rupganj retained the top spot alongside Abahani Limited with 12 points from seven games but stayed in second position by net-run-rate.

It was Nabil Samad who made the breakthrough for Rupganj by taking out inform Saif Hasan (5) cheaply but opener Imran-uz-Zaman and Mahmudul Hasan kept Doleshwar in the hunt.
As they grew with strength, Shahid broke through with the wicket of Imran who made 37 and looked destined for big score.

Shahid then got another key wicket of Marshall Ayub (5) to peg back Doleshwar’s innings and considering the match scenario it was big blow as Doleshwar couldn’t recover from despite Saad Nasim’s 62 ball-61.

Ably supported by fellow pacer Shuvashis Roy, Shahid cleaned up the tail of Doleshwar to give Rupganj such a comprehensive victory that was beyond their imagination. Shahriar Nafees struck 68 and Akbar-ur-Rahman made 67 to shape Legends of Rupganj innings.

They shared 101-run partnership for the third wicket stand after Rupganj were reduced to 83-3. That set the platform, standing on which Naeem Islam hammered 31 ball-43, to help the side propel past 250 runs mark. Doleshwar skipper Farhad Reza continued his rich vein of form with cherry, scalping 4-52.

Fast bowler Khaled Ahmed also dazzled with cherry, bagging 3-42 alongside Taijul as Khelaghar found them in wanting and finally were restricted to a paltry183-9, a total which Shikeh Jamal overhauled with 48 balls to spare, reaching 185-5.

Opener Imtiaz Ahmed was the top-scorer for the side with 47 while Fardeen Ahmed and Tanbir Hyder made identical 25.

The victory could have been more facile for DPL T20 champion Sheikh Jamal, had the batsmen could convert their start to big one. Nasir Hossain and captain Nurul Hasan also failed to carry on the start and was dismissed on 20 and 22 runs respectively.

Ziaur Rahman, 20 not out and Taijul Islam, 15 not out, sailed the side home. It was Jamal’s fourth consecutive victory in the league, after failing to register any victory in the first three matches.

Tanvir Islam and Robiul Haque grabbed two wickets apiece for Khelaghar. Taijul however tore apart Khelaghar’s top-order with a crafty spin bowling that effectively prevented them from scoring big total. Taijul’s three-for in first spell, left Khelaghar at precarious 64-4 before Moinul Islam struck 55 to help the side’s bowlers give something to defend. Amit Mojumder was the other notable scorer with 40 while Rafsan Al Mahmud made 26.