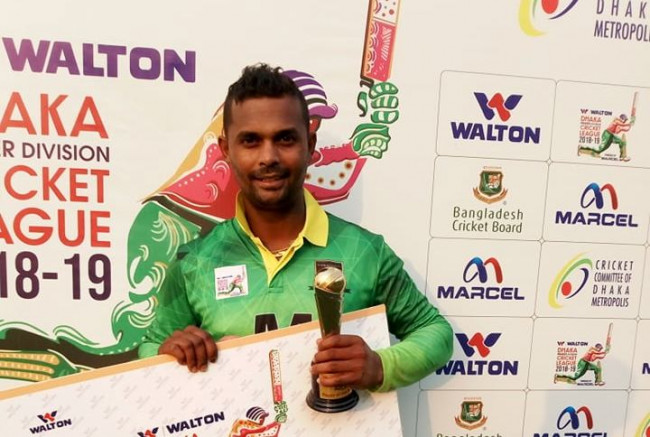 Sheikh Jamal Dhanmondi Club and Legend of Rupganj won their respective matches in the Dhaka Premier League (DPL) at a different venue across the city on Monday.

Captain Nurul Hasan led the side from the front and Ashela Gunaratne shined in with all-round performance as Sheikh Jamal Dhanmondi Club recorded a comprehensive 43-run victory over Gazi Group Cricketers in the sixth round game of the Dhaka Premier League (DPL) at the Khan Shaheb Osman Ali Stadium in Fatullah.

Nurul’s run-a-ball-81 not out was complemented by Sri Lankan recruit Gunaratne’s whirlwind 79 as Sheikh Jamal compiled a hefty 277-6 in 50 overs.

Playing his first match after surviving the Christchurch attack, during Bangladesh’s tour in New Zealand, pace bowler Khaled Ahmed was instrumental in wrapping Gazi Group up for 234 in 47 overs, grabbing 3-31. Gunaratne also dazzled with cherry with 2-50.

Nurul gave the side impetus after his side looked strangled by disciplined bowling attack of Gazi bowlers. Opener Fardeen Hassan though scored 46, the slow batting of the top order was about to cost the game until Nurul took the onus to pace the innings. He got ably support from Gunaratne who struck seven fours and two sixes in his 65 ball-79 as the duo shared 121-run for the fifth wicket stand. Nurul smote eight fours and one six in his 81-run knock. Gazi’s Indian recruit Parvej Rasool snapped up 3-37.

Khaled Ahmed scythed down Gazi top order, ably support from fellow pacer Salahuddin Shakil (3-47), leaving them in a precarious 47-5. As the defeat was inevitable, Shamsur Rahman hit 81 and Mehedi Hasan scored 60, only to reduce the margin.

Opener Mehedi Maruf hit his second successive ton as his side Legends of Rupganj whacked Khelaghar Samaj Kallayan Samity past by five wickets in a game of the Dhaka Premier League (DPL) at the BKSP-3 ground.

Maruf followed his 137 against Gazi Group Cricketers with 108 in this game as Rupganj reached 268-5 in 49.2 overs, overhauling Khelghar’s 264-3 in 50 overs. By virtue of the victory, Rupganj acquired 10 points from six games, same as Abahani but stayed in the second spot in terms of net-run-rate.

In pursuit of the target, Maruf and his fellow opener Mohammad Naim combined for a 118-run partnership for the opening stand to make the chase a cake-walk. Naim was dismissed after scoring 72 off 73, hitting nine fours and one six after which Maruf got apt support from Mominul Haque. The duo shared further 64-run to keep the side in the hunt before Khelaghar took some quick wickets.

With the side 26 runs away from the victory, Maruf was removed after smashing eight fours and two sixes in his 134 ball-108. Skipper Naeem Islam with 28 not out led the side to the victory.

Moinul Islam was the most successful bowler for Khelaghar with 3-42. Khelaghar’s Indian recruit Ashok Maneria was key in the side’s respectable total, hammering 79 ball-87, which was studded by seven fours and two sixes. Mahidul Islam Ankan struck 77 while opener Robiul Islam Robi contributed with 53. Muktar Ali, Rishi Dhawan and Shuvashis Roy picked up one wicket apiece.