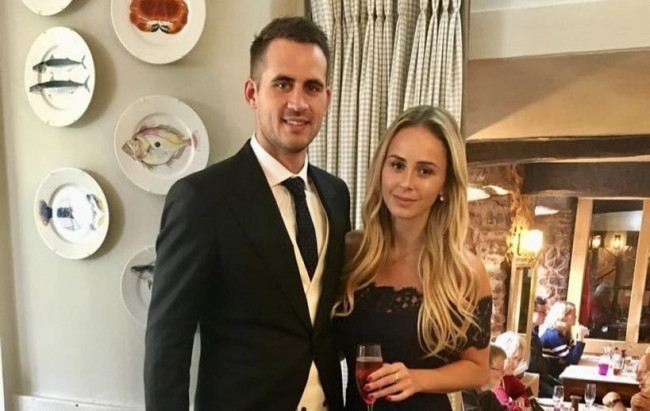 England batsman Alex Hales's girlfriend has left him after learning of his infidelity during England's tour of Barbados, prior to her arrival, which had become 'the talk of the hotel'.

Danni Gisbourne, 26, joined Notts and England opener Hales in the Caribbean just days after a recent fling, The Sun reported, but flew home shortly afterwards in tears after other players' partners told her of the betrayal.

The paper reported that Ms Gisbourne had already issued Hales his 'last warning' after accusing him of cheating in October.

In September 2017 Hales and England team-mate Ben Stokes was involved in a brawl outside a nightclub that led to Stokes being charged with and cleared off affray. Nottinghamshire batsman Hales, 30, arrived in Barbados in January for the England tour and Danni flew out to meet him last month.

The pair, who have been dating for three years, were seen out at dinner and she posted snaps of them at the upmarket restaurant The Cliff.

A source told the paper: 'She was absolutely clueless that days before she arrived Alex had jumped into bed with another woman. She was devastated when she found out.

'She felt humiliated because he had managed to keep a lid on it for so long. But once the other Wags found out what had happened, it was decided that someone should tell Danni. It was so out of order and was the talk of the hotel.

'Danni hit the roof and confronted Alex. She dumped him there and then and got the next flight back to the UK. She'll never take him back.' Mail online quoted it keeping the source name undisclosed.

A source said Hales had cheated previously and Danni would now 'never' take him back. The source said Hales had previously had to beg his legal assistant girlfriend for forgiveness after being caught out last year, adding: 'Danni's known Alex has a wandering eye and she accused him of bedding another woman in October. He didn't deny anything and begged her to take him back. She went on holiday to Australia to clear her head and Alex swore he was a changed man and that he loved her. Danni believed him but now she feels like a fool. It shows a leopard really can't change their spots.'

After Danni left Barbados, other cricketers' partners are said to have turned frosty towards Hales, sowing discord in the camp. The source added: 'Alex is a filthy dog as far as the other wives and girlfriends are concerned. Danni's family were stunned too.

'To make matters worse, Danni's sister Harriet is dating Alex's friend and Nottinghamshire team-mate Jake Ball. It's incredibly awkward and painful for everyone.' Hales was on a night out with pal Stokes in 2017 when they were involved in a row.

Stokes was cleared of affray last August with a jury believing that he acted in self-defence when he punched two men. Hales faced no criminal charges.