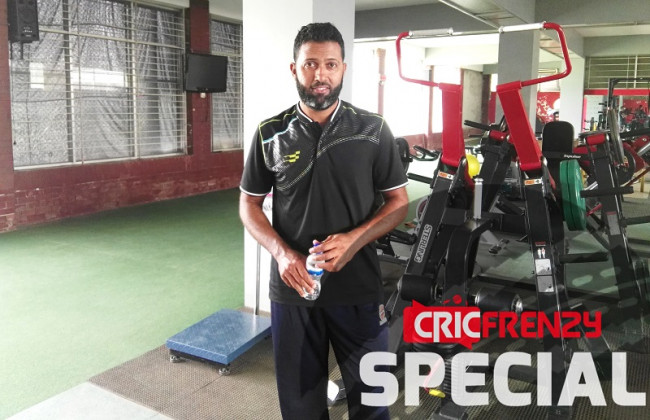 Dubbed as one of the finest openers of India, Wasim Jaffer’s career didn’t reach as peak as everyone expected. Partly for his inconsistency but vastly for the reason that India were blessed with so many excellent openers during the period of his peak moment, Jaffer’s career in national fold came to an end. But he continued piling runs in domestic cricket and it continues till date. The Mumbai opener is in Bangladesh to play the Dhaka Premier League (DPL) for defending champion Abahani Limited. It is his first stint in Bangladesh’s domestic cricket and he wants to stamp his authority. The Cricfrenzy’s Muhammad Jubair has recently caught him up for an in an exclusive interview where he opened him up like an open book.

Here are the excerpts of the interview:

Cricfrenzy: You have played 30 odd test matches for India when Indian batsmanship was on a high. How was it playing alongside greats like Sachin, Rahul and the others?

Wasim: It was an absolute honour first of all to represent India. It was my dream when I started playing cricket when I took up cricket very seriously, obviously, that was the aim I followed. That was the optimum that I wanted to play for India. Up until now, 275 to 300 people have played for India. So I find myself very fortunate to have represented my country and especially alongside those great players. I grow up watching Sachin Tendulkar, we are from the same state. So I watched him very closely. Then again Rahul Dravid, Sourav Ganguly, Azharuddin, Anil Kumble, VVS Laxman and all those guys. I was lucky enough to have played in that era where some great players were playing. And I was lucky enough to represent 30 odd test matches for India.

Cricfrenzy: You are known for your elegant batting, tell us about your batting style. Is it just the Mumbai thing? All the Mumbai batsmen are so good to watch when they get going.

Wasim: I think the famous thing about Mumbai is not to give away your wicket easily. That ‘kharoos’ (stubbornness) attitude we call it. At no matter what you have to win. No matter what you have to find a way to score runs and find a way to take wickets and find a way to win. That is the attitude of Mumbai players and Mumbai teams. So I grow up playing with those players and player among very great players. Many of them did not went on to play for India, but they represent their state very proudly. That is where I got this attitude that is what Mumbai batsmanship is all about. When you cross 20-30, you are expected to score a hundred and not throw away your wicket even after a hundred. Go on and get 150-200-250. So nothing is enough. That is the kind of attitude Mumbai players have and that is what I have gained playing Mumbai and learning from those players.

Cricfrenzy: Then you replicate that international cricket as well…

Cricfrenzy: Double century in the West Indies, the special hundred in Cape Town, South Africa, and the runs in England, those are the highlight of your career. The series win in England and West Indies, happy memories?

Wasim: Definitely, we won a test series in England after 26 years. We won a test series in West Indies after 31 years that was the highlight. And get a double hundred as you said against Pakistan and West Indies was a small highlight. Getting a hundred in Cape Town also I feel very happy. I am the only opener who is got hundred in South Africa from India. So I feel very happy to have played in that era and had a bit of success as well.

Cricfrenzy: Despite being successful, your test career was a bit up and down. Now how do you look back at your India career?

Cricfrenzy: When did you think it all ends, is it 2008 Australia series?

Wasim: Kind of, I had three bad test matches. So you know that did not help. I mean at international level you are anyway under so much pressure. So when you fail in three-four innings, obviously the pressure is on you. But that is life, you know. There are going to be ups and downs. You got to accept that.
Cricfrenzy: From the early 2000s, Indian cricket has gone from strength to strength. What changes so dramatically in Indian cricket that caused that massive change?
Wasim: I think the change came under Sourav Ganguly. When he took over as a captain, India became a very good team. We found Zaheer, Javagal Srinath was there. Ashish Nehra was there. Later on, Irfan Pathan came. So I think the change came when Sourav Ganguly took over and it transformed the team. Then later on under Dhoni and obviously now under Virat, the team is going from strength to strength. So a lot of credit has to go to Sourav Ganguly also, cause he changed the mindset. I don’t think there is many teams who can trouble India in India. But the trouble is when we travel abroad. Especially In Australia, England and South Africa. That is where we come into the position where we can win and then we let that go. That is something we need to look at, hopefully. We have beaten Australia in Australia, the first Asian team to do that. So I think the team can go from strength to strength.

Cricfrenzy: What about the current Indian team, they are pretty successful away home.

Wasim: We are not a very good traveller, I would say. But lately in the last two-three years, we found the bowling that we want, especially in away series, you know the kind of fast bowlers who can give troubles to the other batsman. And that is exactly what we got, we got Bumrah, Sami and Ishant Sharma has matured a lot. Bhuvneshwar Kumar, we have got Hardik Pandya who is a very good all-rounder. We always had the batting. But the bowling department wasn’t that lethal in away series. The result that we have got in Australia, where we won the series. In England, we are very close to beating them. We should have beaten them. Even in South Africa, we should have beaten them. I feel under Virat Kohli the team is playing very positively. At any stage, they are only thinking about winning. That is the change of the mindset.

Cricfrenzy: You have been a giant run-getter in the domestic cricket back in India. How did you motivate yourself for so long and still playing cricket with a very impressive form?

Cricfrenzy: What India did over the last five-six years in terms of domestic cricket?

Wasim: I think the cricket committee is taking the right decisions. They have appointed the neutral curators in the games. So the home team can not have the home advantage. They can not prepare the pitch as to their liking. Which is I thing a very good change? So as long as cricket is played on sporting wickets. You are going to see good cricket and good cricketers coming up. So the committee is taking the right step. The umpiring standard I feel is gone up in India. The cricketers, you play 10-11 first class games, so there is a lot of hard work, you stay away from home for two-three months. So there is a lot of fitness that challenges you, the mental skills, the skills that require in the pitch. I just wish and hope, the young cricketers take first-class cricket very seriously. I know IPL is a much better platform, much bigger platform. But that should be the next step, the first class should be the stepping stone for them and then later on the IPL. You should not take it the other way around. The IPL take the priority and first-class cricket is the second step. That is what I want from the young players. They take first-class cricket seriously. Cause four-day cricket is a lot different from T20 cricket. There is a different skillset, different mindset as well. I hope the young cricketers take that seriously and I want them to value test cricket. Test cricket plays a very important role. The respect that a cricketer gets is from test cricket. So I hope they young cricketers take that to note.

Cricfrenzy: Bangladesh is struggling in test cricket away from home, do you think Bangladesh should follow that ‘Indian’ blueprint for test success?

Cricfrenzy: How does it feel playing domestic cricket in Bangladesh?

Wasim: This is the first time I am playing. I have been happy, the way cricket is played, it is as good as one day cricket in India. The competition is pretty good. The Abahani team, they are full of Bangladeshi star players. So that is one good thing. The international players are playing in this league. That will give the younger players a lot of motivation to do well. You know seeing Mashrafe play, seeing probably Shakib play when he is fit, seeing the first class players play, I mean when all the international players come back and play here, it gives a lot of motivations to the younger players to do well. That will make them play even up to their standards.

Cricfrenzy: Playing for one of the best team in Bangladesh, must be a happy feeling.

Wasim: It is, as I said, Abahani is full of Bangladesh cricketers. As good as the national team. So it always feels good. They are a very strong side. I would like to, first of all, perform from them and then whatever value that I can add, if I can input anything with my knowledge and experience, I am happy to do it.

Cricfrenzy: Mashrafe got you out the first ball on a test match here in Bangladesh. Now you are playing for the same team.

Wasim: Yes, I don’t want to remember that (smile). Very good, he is obviously the national captain. I wish him luck for the coming world cup. I wish him Bangladesh also. I wish them luck. I feel they have got the side to upset good teams as long as they play to their potential. They have to fire power to upset big teams and go further. I have seen them play a semi-final in champions trophy. So they have the potential. As long as they fire at the right time and they pick at the right time. Mashrafe has been a great servant for Bangladesh cricket. He has been playing for good 10-15 years, I wish him all the best and wish Bangladesh cricket all the best.

Cricfrenzy: Another family member of yours is playing cricket, your nephew Amraan Jaffer. Tell us a bit about him.

Cricfrenzy: Coaching, commentary, what next for Wasim Jaffer?