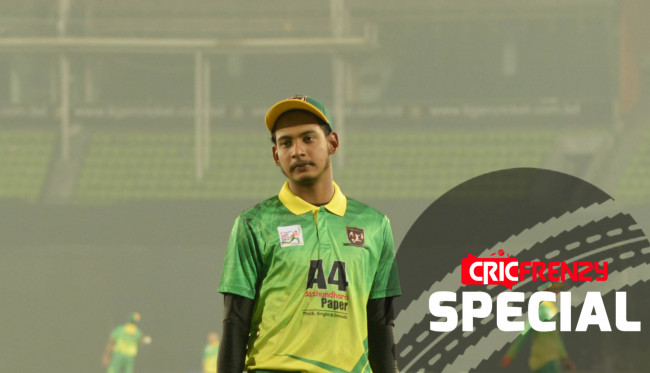 Chittagong's Minhazul Abedin Afridi’s cricketing journey is not as meteoric as many have.  Watching his handy leg-spin in the net, BCB chief selector Minhajul Abedin Nannu picked him for the BCB XI in a practice match against touring Zimbabwe in October, last year.  In a country where hardly anyone could aspire to be a leg-spinner, Afridi managed to impress so many to such extent that he found a BPL franchise in Rangpur Riders.

And he continued to impress, prompting Bangladesh ODI captain Mashrafe Bin Mortaza to loud his bowling. Then came in Dhaka Premier League (DPL) where he was roped in by Sheikh Jamal Dhanmondi Club. All happened in just six months. The 20-year-old leg-spinner has recently played a major role to help Sheikh Jamal in lifting DPL T20 trophy. Thereafter he made his List A debut with the match against Uttara Sporting Club just some days ago. Afridi tells Cricfrezny about his journey which is still going on:

Cricfrenzy: How did you get a chance in the preparation match against Zimbabwe?

Afridi: I had been there with Bangladesh team as a net bowler during that series. Then, Nannu (Minhajul Abedin) sir took his interest in me after I did bowl on the first day. He asked about me to the local coach Raj Kumar sir- my name, my residence etc. He [local coach] informed Nannu Sir that I had played in the Chittagong Premier League. Then, Raj Kumar sir told me that Nannu sir wants me to talk with him for the preparation match against Zimbabwe. He also said that I am in the BCB XI squad. But the first day has been washed out due to rain. We batted the next day. We got the chance to bowl in the last session of the day. I got one wicket in three overs. This was the story to be fast-tracked from the net bowler to BCB XI.

Cricfrenzy: Have you ever thought that after that match you will come so far within a short time?

Afridi: No, when I got the chance in that match, I thought that one day I would play in BPL, Dhaka League or in the national team. By the grace of Allah, I had already played my first BPL. I had come from as a net bowler. Rangpur Riders were seeking a net bowler that time. I had a call, whether I would be a net bowler in Dhaka. I had no work at that time, so I came to Dhaka for net bowling. Three days later, they informed me that I am in Rangpur squad.

CF: Who choose you from the Rangpur net?

A: Coach Tom Moody and Mashrafe vai have chosen me. Manager Mitu Bhai had also seen me.

CF: You have been selected by the great coach and the cricketer. It was obviously a huge achievement for you and your family?

A: Yes, thank Allah. I was always expecting something like this. But it was more my father’s expectation than me.. I lost my father in my childhood. He was in the printing business in Anderkilla, Chittagong. I was in class three at that time. My father had a dream that among our three brothers, one will become a cricketer. He is my inspiration. His inspiration has driven me here after his death. And obviously, some of the senior brothers in my area, who taught me cricket and helped to carry on this… It was another big fact.

CF: Have your father sent you here?

CF: Is it the main reason behind your name ‘Afridi’?

A: Yes, my name is Afridi because of this.

CF: Have you bowled against AB de Villiers?

A: After getting a chance in the Rangpur squad, they told me to bowl against the foreign players. Coach told me to bowl more against foreigners. I said to myself that now I am in this place but if I do well here, I may go to the top one day. I mostly played with local cricketers. There is no any big player in the Chittagong Premier League. So I kept faith in me that I can do it if I got a platform for performance. I have tried. The coach told me one thing –to try to read the batsman and bowl accordingly. I try to do that, I do not think who is batting. De Villiers is a world-class player. I bowled him the same way, as I do normally. Tom Moody is a great coach. He suggested me one thing and I did bowl according to his suggestion. I found that better and bowled De Villiers like that.

CF: What was the experience of the first match of the BPL?

A: I have been informed about my participation in the playing XI after going to the field in the dressing room. Coach told me then you are going to play today. Then he said, keep your brevity on yourself, do the same thing whatever you have done in practice. Take it as a practice match. Then I felt that I am going to play for such a big team in such a big stage. There are many big players in the squad - Chris Gayle, Mashrafe vai, De Villiers, Bopara. It seems like a dream.

CF: And Playing with Mashrafe ...

A: I had a dream that one day I will meet with Mashrafe vai. I will go in front of him, I will see him closely. He is a very great man. But I had played with him in Rangpur. It felt good…  to play in such a big team.

CF: You have done an amazing bowl in the DPL T20…

A: Everyone was excited before the tournament. Everyone was thinking that he will do well, will play the final. Sohan Bhai always said to be a champion. I did not play three out of four matches. The final match was a big match. It was broadcast on TV. DPL T20 final for the first time. I will play final match … I was very much excited. I had been informed a day earlier that I am in the team. Team management, coach and everyone trusted in me. Thank Allah that everything went well.

CF: You have recently been debuted in ‘List -A' …

A: My dream was to play in the Dhaka Premier League. I did not bowl of my quality that day. The debut match was very good but the ending was not like that. I wanted to give my best. Dhaka Premier League is one of the top leagues in Bangladesh. There are more matches in future… if you get a chance, then definitely do well. I will try to maintain the same quality of bowling which I did in the BPL and the DPL T20.

CF: When do you start leg-spin?

A: I was playing Tape-Tennis-Cricket in my area. That time some of my senior brothers told me to participate in the local talent hunt. Asadul Islam, Shamshed Ullah Rajib and Manik are among of them. The hunt was done by the Pahartali Cricket Club. I took part in the competition. They asked me to come, but I said I didn’t know anything, what will I do? He insisted, come first… we will see later. After then they told me to bowl the leg spin. The senior brother told me bowl like Shahid Afridi. I did not know anything, how to grip the ball, how to spin etc. Then, they show me how to spin. This is how the leg spin started. Then they gave me a chance to play in one of the teams in ‘Meridian Victory Day Under-15 Cricket Tournament in Chittagong’. I became the man of the match taking three wickets in the first match. That was the starting. Then I had played Under-18 tournament in Chattagram in 2012. I got nine wickets in four matches there. After that, cricket was being stopped for two years.

CF: What was the reason behind this temporary ending?

A: I stopped playing due to the pressure of studies. My mother told me, no need to play now, concentrate on study and pay attention. You will again start playing later. After that, all the practice, games ended. After two years, I started again practising. There is an academy of Chittagong, Siraj Four H. Academy, I had been admitted there. I am still a student of that academy. I had practised there after the BPL. After practising there for three years, I got a chance to play for Chittagong Abahani in the Premier League. I could not play matches in the first year due to my sickness. Last year I played there. I picked up six wickets in two matches. Then, I had played against Zimbabwe in the practice match, then BPL and now in Dhaka Premier League.

CF: Who is your idol?

A: Shahid Afridi is my idol.

CF: Where do you see yourself in the future?

A: Every cricketer here has a dream of playing for Bangladesh, of wearing a green-red jersey, of representing the country. I have had the same dream. I also want to play for Bangladesh, want to be a regular member of the Bangladesh team. I want to be like Mashrafe vai, Shakib vai, Tamim vai, Mushfiqur vai and Riyadh vai. I want to do something which will make me unforgettable and want to give something to the country.