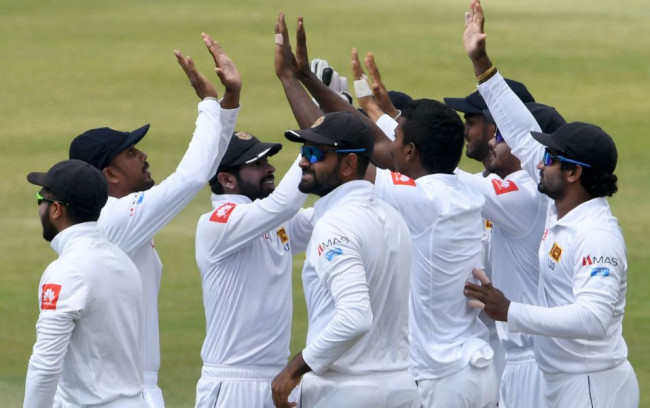 Bowlers handed the command to Sri Lanka and them on top on the day one of first Test in Durban on Wednesday. Vishwa Fernando and Kasun Rajitha claimed seven wickets and restricted South Africa for 235.  The visitors scored 49 for one at the stumps, trailing by 186 runs.

Before the match, Faf du Plessis marked on Lankan's ‘pacerless’ bowling line-up. But the visitors proved him wrong at the end of the day.  However, Quinton de Kock's aggressive 80 saved the home side after they were reduced to 131 for 6 at one stage.

Earlier on the morning, Sri Lanka invited the hosts to bat first in the bouncy Kingsmead wicket. South Africa got the first blow when Vishwa Fernando dismissed Dean Elgar for zero in his first over. Fernando stroke again and removed the other opener Aiden Markam for 11 after experienced Lakmal sent back Hasim Amla for 3 runs. The Proteas lost top three wickets for just 17 runs.

Temba Bavuma and Faf du Plessis tried to rescue the home side. The pair added 72 runs in the fourth wicket-stand. But Kasun Rajitha sent back the captain for 35 and broke the partnership. After then Bavuma went back to the pavilion for 47 due to an unfortunate run out.

Bavuma’s departure announced the batting disaster of the hosts but Quinton de Kock took the charge and made aggressive 80 including 8 fours and 1 six. The wicketkeeper-batsmen held the one side though the rest of the batsmen failed to give any support him. Vernon Philander (4), Keshav Maharaj (29), Kagiso Rabada (3) and Dale Steyn (15) went back to the dressing room one by one. The hosts finally posted 235 before the Quinton de Kock removed by Rajitha. Fernando claimed 4 for 62 while Rajitha clinched 3 for 68 for the visitors.

Sri Lanka also got an early blow when they lost Lahiru Thirimanne with 19 on the board. The opener caught by wicketkeeper De Kock for a duck off seamer Dale Steyn. However, the captain Dimuth Karunaratne (28) and the debutant Oshada Fernando (17) survived before bad light forced an end to the day with Sri Lanka at 49 for 1.