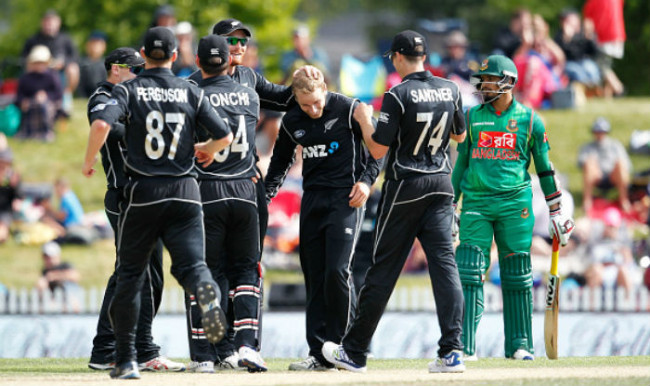 Photo: Bangladesh vs New Zealand during a ODI. -File Photo

Bangladesh so far played three-Test match series thrice—one each against Pakistan in 2003, Sri Lanka in 2007 and Zimbabwe in 2014. The three-match Test series against New Zealand will be their fourth in their Test history, which forced Danny Morrison thinks that the series will take their real test of fitness, especially their pacers.

“Very physical... who can stay fit? Because that's the challenge that Bangladesh faces. Three Test matches (and for the) first time ever…  So try to stay fit and survive the series. Well, that's why you take more pacers. You are going to lean towards your quick bowlers,’’ Morrison said.

“Again it comes back to the conditions. If it's particularly cold, that would be challenging for any side from the sub-continent. ODIs are in February, Test matches in March, and you don't know what you can get in March,’’ said Morrison.

“It can be really lovely but as I said, New Zealand is very changeable climate as you know. So it will be tough with the breeze. Wellington is going to be very tough because it's going to be howling down the pitch. Someone has got to bowl into the wind, tough job. Not easy,’’ he said.

Morrison said that pace bowlers need to swing the ball in order to earn success in New Zealand and indicated he is confident that the touring pacers do possess the ability to give a run for their money.

“Swing is king, you got to be able to swing the ball, and you know (Trent) Boult, (Tim) Southee. (Neil) Wagner does a different job. So different style of bowlers, the Bangladeshis. So certainly line and length, we talk about as a commentator, chapter one verse one, the key - line and length, consistency is got to be key and staying fit is going to be the big issue,’’ said Morrison.