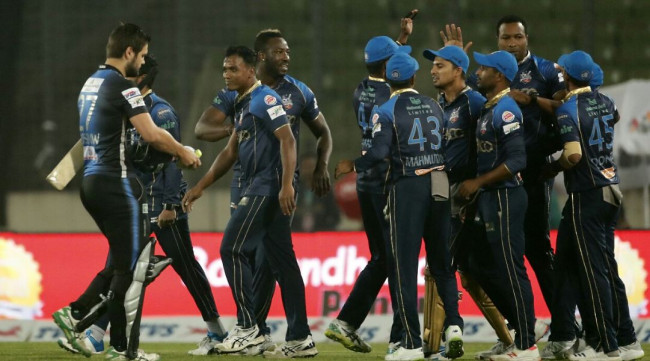 Dhaka Dynamites showed the ruthlessness that their fans dreamt off ever since they formed a team with some power hitters of T20 cricket. In the Qualifier-2 game on Wednesday, they demonstrated that power cricket to crush Rangpur Riders by five wickets at the Sher-e-Bangla National Cricket Stadium and moved to the final of BPL.

They will now take on Comilla Victorians in the final on Friday in their bid to regain the title that they lost to Rangpur in the last season. Epitomizing the brand of merciless cricket, Andre Russell sealed the deal with three straight sixes as Dhaka reached 147 for five, overhauling Rangpur Riders’ 142 all out in 19.4 overs, with 20 balls to spare.

While Andre Russell’s 19 ball-40 not out with five towering sixes signed off the match fitting way, pace bowler Rubel Hossain’s four for 23 was crucial in giving Dhaka a comfortable target. Mashrafe Bin Mortaza’s gamble with Nadif Chowdhury, sending him as an opener seemed to have paid the rich dividend as the opener who played Bangladesh’s inaugural T20 match against Zimbabwe in 2006, gave the side a whirlwind start.

Dhaka Dynamites bowlers looked at a fix by the sudden assault from Nadif, when they expected Chris Gayle to take the anchor role. Such puzzled they were that it took quite some overs for Dhaka bowlers to understand the match scenario. But fortunately for them, they regrouped well to execute their original plan.

They let Nadif to keep hitting all the things coming to him, knowing that one miscued shot would be enough to get the better of him. And exactly that happened. After hitting three straight sixes off off-spinner Shuvagata Hom, he finally miscued one to offer a simple catch at mid-wicket where Keiron Pollard completed the catch to break the partnership.

Nadif by then struck 27 off 12 with two fours and three sixes. But still there was Chris Gayle, who looked to get his Midas touch once he nonchalantly smashed a six over cover region and there was Rilee Rossouw, a man inform who had already broke the highest runs record of BPL in a single season.

Fast bowler Rubel Hossain gave the Dhaka an occasion to exalt by dismissing those two in consecutive deliveries. His nagging length was key in taking those two match-defining wickets. While Gayle poked a length delivery to offer a catch behind the wicket, Rossouw top-edged a short delivery to mid-wicket for first ball-duck.

Gayle however hit two sixes in his 13 ball-15 and with his dismissal, the general expectation of Gayle-storm remained eluded. If Dhaka hoped to peg back Rangpur innings quite earlier than anticipation, it was quickly evaporated by Mohammad Mithun and Ravi Bopara who played with caution and aggression to keep a high run rate.

As Rangpur looked destined to a good score even without the contribution of Gayle and Rossouw, young pacer Qazi Anik dismissed Mithun for 27 ball-38 to break the 64-run fourth wicket partnership. Mithun’s dismissal tilted the momentum further towards Dhaka and this time they never let it go with Rubel again at the fore. He came back in his spell with fire to clean up the tail while Anik gave him the ably support by vexing Rangpur batsmen with his express pace.

Bopara battled lonely to score team’s highest 49 off 43 with six fours and one six. If Dhaka sensed an easy victory, it was dashed by Mashrafe Bin Mortaza’s strike in the first over as he claimed the wicket of inform Upul Tharanga for 4.

Nazmul Islam Apu dismissed Sunil Narine for 14 to further give Rangpur a glimmer of hope. Rony Talukdar was run out for 35 off 24 before Shakib Al Hasan (23) and Keiron Pollard (14) perished to reckless shot, Dhaka were in genuinely precarious state with 97 for five in 11th over.

However Dhaka’s strength lied in their power-packed lower order led by Andre Russell who flourished with full glory in the most crucial game. When everybody sensed a tricky chase, Russell’s mighty hit around corner made it such an effortless victory that Dhaka fans rejoiced with utmost passion.