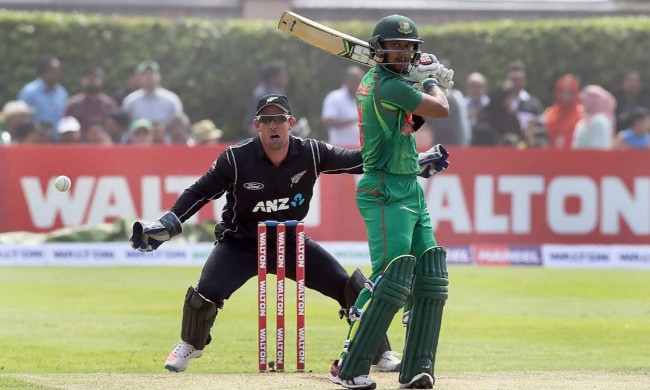 Photo: Sabbir Rahman in action during a match against New Zealand. -Collected

Bangladesh batsman Sabbir Rahman is eyeing to make amends of his previous mistake by not repeating them further and return back cementing his place in the national set-up.

The inclusion of Sabbir in the 15-member remained a talking point since it was announced as there were several contradictory statements regarding his inclusion as he was included despite serving a six-month ban.

Bangladesh Cricket Board (BCB) reduced the international ban on Sabbir Rahman, making him available for selection for the upcoming ODI series against New Zealand.

Sabbir was slapped a six-month ban from international cricket by the BCB in September 2018 for his repeated off-field issues, the latest one being his social network fiasco where he was alleged to have abused and threatened a fan on Facebook.

According to the sanction imposed, Sabbir's ban is due to continue until February 28 but according to BCB chief selector Minhajul Abedin. It has been reduced on the insistence of ODI skipper Mashrafe Mortaza who was impressed by his performance in the ongoing BPL 2019.

After lukewarm performances in the first five games for Sylhet Sixers, Sabbir finally managed to score 85 runs against Rangpur Riders on Saturday (January 19), though it was denied by Mashrafee citing he never insisted but only named his as a possible option.

“Obliviously, this is a big opportunity for me. It may my second chance. I will come back, try to be the old Sabbir,’’ Sabbir told reporters as he was departing for the upcoming three-match ODI series against New Zealand with the first batch of cricketers that left on Wednesday.

“I am not thinking about those happenings. Past is past. I just concentrate on my future. I will definitely try to repay the faith they showed on me,’’ said Sabbir. “I had gone in there (New Zealand) twice. I have experience and know about the condition. I hope I will quickly adapt with those condition,’’ he added.

Earlier, BCB president Nazmul Hassan has issued a warning to batsman Sabbir Rahman, promising dire consequences if there is even one more disciplinary issue concerning the batsman.