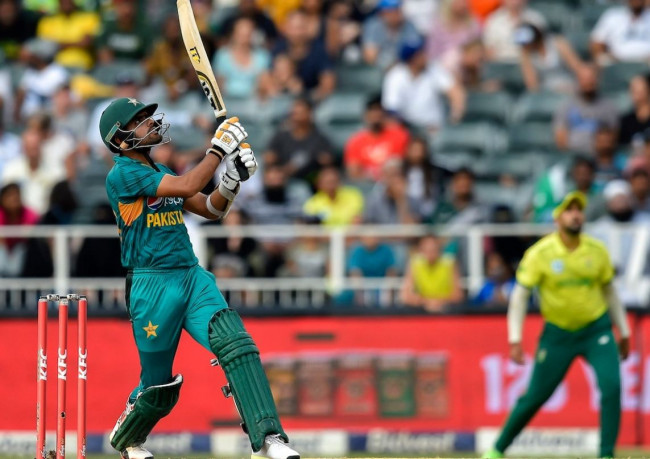 Photo: Babar Azam goes for a big shot during the second T20 between Pakistan and South Africa at Johannesburg on Sunday. :Cricinfo

||Desk Report||
Babar Azam's heroic effort went in vain as South Africa beat the visitors by 7 runs in the second T20 and clinch the series on Sunday at Johannesburg.  With this defeat Pakistan's long streak of T20 series wins came to an end.

They had not lost a T20 series since they were eliminated from the World T20 in India in March 2016. But the hosts took a winning 2-0 lead in the three-match T20 series.
Earlier, after winning the toss Pakistan invited David Miller-led- South Africa to bat fist. Miller led the Proteas for the first time because Faf du Plessis was rested for the last two matches of the series.  The skipper took charge at the death overs and guided the team to an impressive 188 for 3.
The hosts made a relatively slow start with debutant Janneman Malan and Reeza Hendricks. The 58-run stand came to end when Imad Wasim sent back Malan (33) to the pavilion. After then, Rassie van der Dussen improved the scoring rate with a couple of sixes and a four. But Pakistan struck again with Shadab Khan making a pretty good effort to catch Hendricks (28) short of his crease.
Later, Van der Dussen added quick 45 off 27 that help the hosts to cross the 100-mark within 17th over. Unfortunately, he was dismissed by Shaheen Afrid.  Then Miller with Heinrich Klaasen made a fourth wicket stand of 62 runs and spoiled the party with a flourish in the final over. Miller's unbeaten 65 off 29 posted South Africa to 188 runs for 3.
Pakistan scored rapidly at the start of their innings, with Babar Azam and Fakhar Zaman. The pair was broken when Hendricks sent back Fakhar (14) to the dressing room. Then, stubborn Azam made 102-run stad with Hussain Talat (59) before his depurture. Babar was sent back by Hendricks on his nervous 90.
Pakistan middle order collapsed with Babar's depurture. Asif Ali was sent back by Phehlukwayo while Chris Morris bowled Hussain Talat. Imad Wasim (6) also bowled by Morris while Phehlukwayo picked up captain Shoaib Malik (6) on the 20th over. Phehlukwayo also sent back Hasan Ali (1) during that over. The innings ended on 181 for 7. Miller selected as the Man of the Match.
Brief scores
South Africa: 188/3 (20 overs)
Miller 65*,  Van der Dussen 45; Imad 1-9
Pakistan: 181/7 (20 overs)
Azam 90, Talat 55; Phehlukwayo 3-36
South Africa won by 7 runs