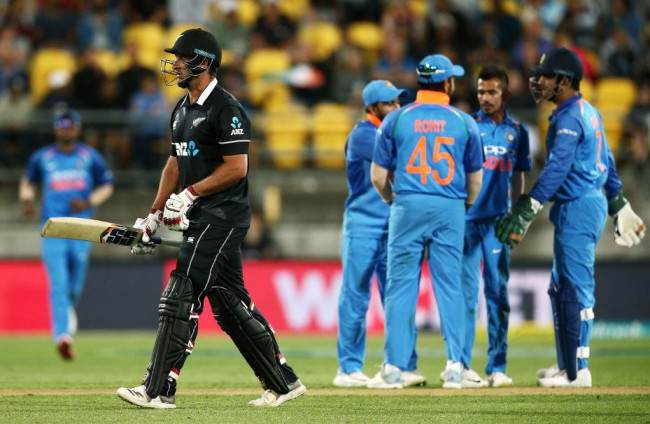 Photo: Colin de Grandhomme walks back after being trapped in front during the fifth ODI between New Zealand and India in Wellington on Sunday. :Cricinfo

India overcome tough conditions in New Zealand and to seal series 4-1 with the fifth ODI win in Wellington on Sunday. Ambati Rayudu (90), Hardik Pandya (45) and Vijay Shankar (45) help India to claim a 35-run victory in the final over the hosts.

India’s middle-order once again prove their worth. After being reduced to 18 for 4, India's middle order led a strong comeback as Kiwis posted a total of 252 in 44.1 overs.

New Zealand also faced bating-disaster when they lost early wickets before a 67-run partnership between Kane Williamson and Tom Latham. Henry Nicholls was handed Mohammed Shami his first wicket. Colin Munro was living dangerously until he chopped on a Shami delivery. The situation became even grimmer when Ross Taylor was out leg-before off Pandya.

After then, the Williamson-Latham association set things up nicely for New Zealand before their struggles against spin resurfaced and left the hosts in a lot of trouble. But the hosts lost quick wickets in the middle of the game.

Williamson was stopped by Jadhav and Latham followed soon after, trapped in front by Chahal after missing a sweep. The legspinner went on to dismiss Colin de Grandhomme to leave New Zealand six down for 135 in the 31st over. Only James Neesham scored 44 and help the team to reach into 217-mark.

Earlier, after winning the toss Rohit decided to bat first but it cost India early wickets. Rohit was bowled by a Henry delivery while Shikhar Dhawan was trapped by Boult. MS Dhoni, returning to the eleven along with Vijay Shankar and Shami, arrived at the crease as early as the seventh over after Shubman Gill failed to keep a drive down off Henry. However, Dhoni has also cleaned up Boult.

Later, Rayudu made a 98-run stand with Shankar before a mix-up ended in the Shankar’s run out. Then, there were some fireworks from Pandya in the death overs as he struck three successive sixes off Todd Astle in the 47th over. His blitz came to an end as India finished with a touch above 250.