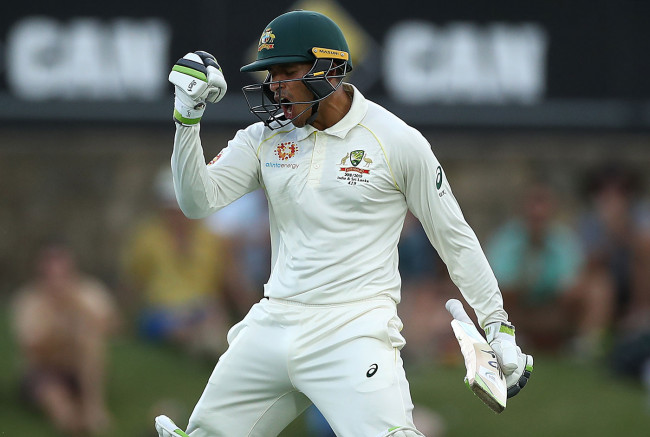 With a Usman Khawaja ton and Mitchell Starc’s strike, Australia took command on day three of the second Test against Sri Lanka at Canberra on Sunday.

A five-wicket haul from Mitchell Starc set up a 319-run first-innings lead for Australia, before Usman Khawaja's second-innings ton set Sri Lanka 516 for victory. The visitors continued to slide towards another morale-sapping defeat, finishing with 17 for 0 in their second essay, still trailing 499 for an improbable win.

Earlier, the two overnight batsmen of the visitors, Dhananjaya de Silva and Kusal Perera, raised hopes of putting up a spirited show. But Kusal was struck down by a short ball from Jhye Richardson. He did not return to bat for the touring side after being hit on his helmet.

Dimuth Karunaratne (59), who received a blow on on Day two, replaced Kusal. Karunaratne soon reached his fifty with a drive off Mitchell Starc. But, he didn't last long as he pushed at one from Starc and was caught in the gully.

After this, Starc had found his rhythm and accounted for the wicket of Dhananjaya. Nathan Lyon also struck twice removing both Chamika Karunaratne and Niroshan Dickwella.

After the Lunch break, Starc finished the race by sending both Dilruwan Perera and Vishwa Fernando back to the pavilion. The hosts had a chance to ask Sri Lanka to bat again but they decided not to enforce the follow on.

Starc picked up his 10th five-wicket haul, and his first since his 5-34 against South Africa in Durban last March, as Australia bundled out Sri Lanka for 215 to take a first-innings lead of 319.

In their second innings, the hosts also had a bit of wobble as Kasun Rajitha struck twice with Fernando picking up one to reduce the home team to 37 for 3. But this time, Usman Khawaja (101*) and Travis Head (59*) jointly drove the team to the 500-mark.

In pursuit of a mammoth target, Sri Lanka’s opening pair of Karunaratne and Lahiru Thirimanne survived a tricky period at the fag end of the day to ensure the tourists would have all wickets intact. The hosts ended the day 10-wicket away from the 2-0 series win.