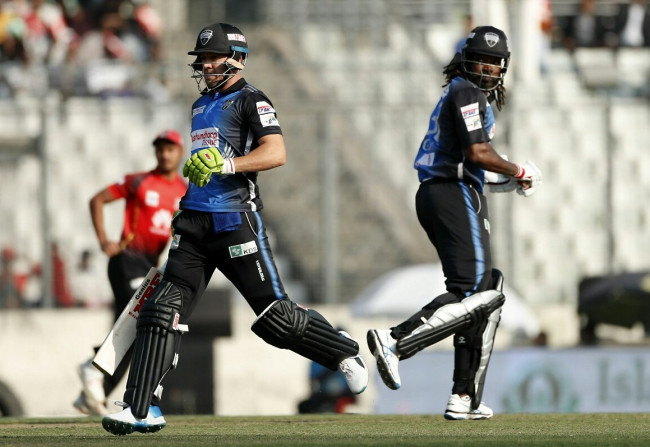 Rangpur Riders skipper Mashrafe Bin Mortaza on Saturday insisted that he have full faith on the ability of Chris Gayle despite his lack of runs in the ongoing Bangladesh Premier League.

The form of the Gayle turned out to be a matter of concern for Riders as the 39-year failed to do justice with his name in the sixth edition of the tournament from the start of the tournament but despite everything Mashrafe looked optimistic that he would perform well in the remaining matches of knock-out stage in the ongoing BPL.

Gayle, who was the best performer in last year’s tournament, has played 10 matches so far in the tournament, could score only 142 runs at an average of 15.77 and his highest score of 55 runs came against the bottom team of the points-table, Khulna Titans.

“See, you can’t predict anything in cricket. You can’t guarantee that he [Gayle] will do well in today’s game,’’ Mashrafe told reporters after his side clinched a thumping nine-wicket win over Comilla Victorians in Mirpur.

“He is a kind of player who can change the course of the game by his own. He not only proved that in last year but also in many times around the world in this format,’’ he added.

Gayle showed some sign of delivering to his captain’s trust on Saturday when he hit unbeaten 35 off 30 balls that powered Rangpur to chase down Comilla’s 72 runs in just 9.3 overs to guide his side finish the league stage on a high note.

The Caribbean batsman had started his innings slowly with making just six runs off his first 14 balls but he later on got momentum in the innings when he hit Afghan left-arm spinner Waqar Salamkheil a six and a four in the seventh over.

Gayle looked much confident later on and remained unbeaten with AB de Villiers, who also made unbeaten 34 off 22 balls and their 67-run second wicket stand cruised Rangpur to winning line comfortably.

Despite his lack of form, Rangpur hardly had problems as their remaining foreign stars like – Alex Hales, AB de Villiers and Rilee Rossouw consistently provided scintillating performances that gave them six successive wins in the tournament and they eventually finished top in the league-phase points-table.

“No, it seems like fun to me now! Rousseau, Hales unexpectedly made big scores and it was an advantage for us. But AB and Gayle are always special. We always want the best from this duo. Unfortunately we lost Hales. We also knew AB will play only six matches. So, we are mentally prepared,’’ said Mashrafe.

As Hales already ruled out with a shoulder injury and de Villiers will leave Dhaka before the start of play-offs, Mashrafe will be hoping to get an inform Gayle, who took last BPL by storm and single-handedly won the tournament for them.

“Definitely, we will miss Hales and others, especially in the dressing room. But we haven’t thought about it yet. We are lucky that Hales got runs on these wickets. He had done well especially in Chittagong. If the semis and final took place in Chittagong, we would miss him. But these stages will be held at Mirpur. Anything would happen here. Our local players should understand that they also can perform like Hales. And it is the right time to prove their ability,’’ said Mashrafe.

‘‘Ravi Bopara played in place of Alex Hales today and we needed to play Gayle as he needed to get back into touch. It was the last match of AB de Villiers so he should have to play,’’ he concluded.

We want to change our records against Bangladesh: Chibhabha