I believe in process, not result: Nayeem Hasan 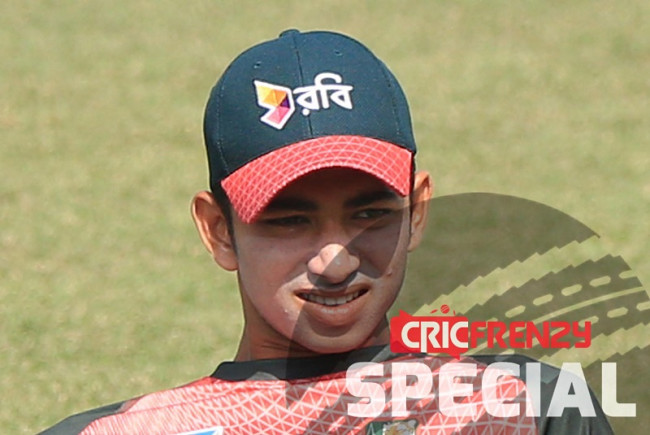 Nayeem Hasan was arguably the find of the year. At the age of 17 years and 353 days, the lanky off-spinner claimed a Test five-for against West Indies to be the youngest player to have achieved the feat. But more than his landmark feat, what drew the attention was his ability to spin the ball unlike the other Bangladeshi spinners, who generally bowls with defensive mentality- containing the batsmen by trying to bowl on the pads in a diagonal direction. Nayeem was the one who reminisced the past generation of finger spinners who had the courage and ability to invite the batmen with their loop and flight, which is why experts had already earmarked him as the big prospect of Bangladesh cricket. The off-spinner however talked to Cricfrenzy’s Muhammad Jubair about his national team experience, his dream and the mental toughness that helped him thrive in Test cricket in the very first outing.

Here is the excerpts of the interview...

CF: You got your first test call up early in this year. Looking back to that, how it felt like?

Nayeem: I was in New Zealand playing under-19 world cup when I got the call. I was too happy to express the feelings.

CF: You have been outstanding throughout this year. How did you rate your domestic performance and how it helped you to flourish in International arena?

Nayeem: Whenever I play, I always focus on being serious about the game. Be it a club game or test match I always think of giving my best. After becoming the highest wicket taker in the NCL, I set my goal to become the highest wicket taker in BCL as well. But at that time I got the call, I played test matches for my country. It all went good by the grace of Almighty. Then I played Emerging Cup.

CF: What was your experience in Emerging Cup?

Nayeem: I didn’t play from the first match. I played from the second match. I did play my part. In the first match, no one did well in the batting powerplay with the new ball. The I bowled with new ball from the game and it went augurs well. I was economical and at the same time got wickets.

CF: Were you surprised to get a Test cap so early?

Nayeem: It was normal for me, to be honest. I didn’t feel like I was playing Test cricket for my country. But on the way to return to the hotel after the completion of the game, I felt I was over the moon.

CF: How it was like to share the dressing room with the stars player like Shakib Al Hasan and others? Did that give you any Goosebumps?

Nayeem: Shakib bhai was very supportive and gave me the courage. We talked a lot while I was bowling. He also shared his experience.

CF: What was the difference between the domestic and Test cricket that you felt?

CF: To see the things easy—how did you hone that mentality?

Nayeem: The change was made during my Under-19 playing days. When I was playing age level cricket, I used to dream about being the best player I could. Then I got the national call up, didn’t play a game. I went to play premier league cricket. When I got into the national set up for the first time, I noticed how the other cricketers think about the game, they take it so positively. After that, I started changing myself, my thinking. Now I always think positive.

CF: Now you are a Test cricketer, don’t you feel proud about it?

Nayeem: It’s just a start, nothing to be proud about. I’m just a normal human being. Like me, lots of boys are trying so hard to make it to the big stage. Almighty gave me the chance, now I have to make it big. I wanted to be a world class spinner.  When I will finish playing cricket, by then if I could become a successful cricketer, then I might feel proud of myself.

CF: What's your goal when it comes to ODI and T20I cricket?

Nayeem: Miraz bhai is playing in the national side, as an off spin all-rounder. Now my goal is to prove myself, whenever I get the chance. I will try to prove myself. Be it Test, one day or T20.

CF: How do you adjust from Test cricket to limited over cricket?

CF: What's the success story behind your batting?

Nayeem: When I walked in with a bat in my hand, I am just a batsman. I think like a batsman that moment. And I was a pure batsman back in my age level cricket.

CF: BPL will bring some extra pressure for you, how will you handle that?

Nayeem: I'm not feeling any pressure. I just want to play my natural cricket. I don't think much about playing good cricket. If I got the wicket or got the runs, doesn't matter. My whole thinking is to give my best in the field. So that I can come home and say it to myself, hands on heart, I tried my best, I gave my 100%.

CF: That means you have no faith in result, rather you just believe in process?

Nayeem: Yes, I just try to maintain the process and try to give my 100%.