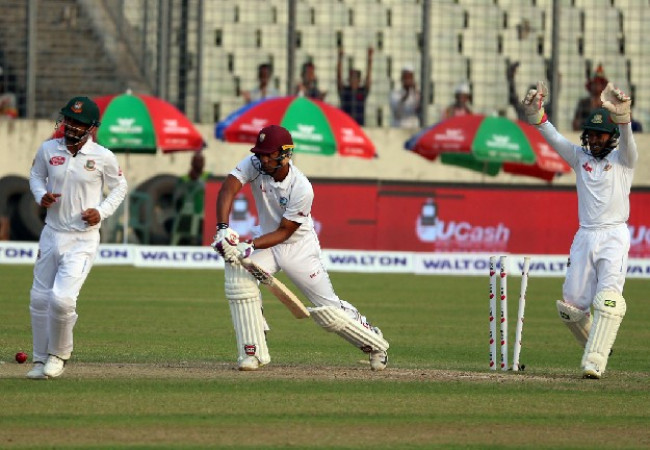 West Indies are on the verge of receiving what they gave Bangladesh in last July. The Tigers never forced any team to follow-on despite getting the chance on two occasions—both against Zimbabwe. With West Indies still needing 234 runs to avoid follow-on after being slumped to 75/5 in reply to Bangladesh’s 508 in the first innings, there is realistic chance that Bangladesh can give them a shot to earn their first ever victory with innings margin.

It would be somewhat a shameful incident for West Indies since Bangladesh for the first time nears a chance of enforcing a follow-on against a team other than Zimbabwe.

“It is not an ideal position we want to be in as a team, after fielding for so long. And not bowling Bangladesh out for a good total, you want to be in a better position. A bit disappointed for the team but we’ve got to come back tomorrow and bounce back,” said West Indies left-arm spinner Jomel Warrican.

What Warican believes is that their batsmen failed to apply themselves well, searching for more turn.

“I guess the guys played for too much turn and clearly the ball kept straight and lost the key wickets. We just need to apply ourselves tomorrow, the batsmen to come, and get West Indies off to a good start in the morning and a good total,” he said.

“That’s the plan. We gotta come tomorrow, bat well. Hopefully Hetmyer and Shane Dowrich can get a big score because they look very good batting and take it into the fourth day.”