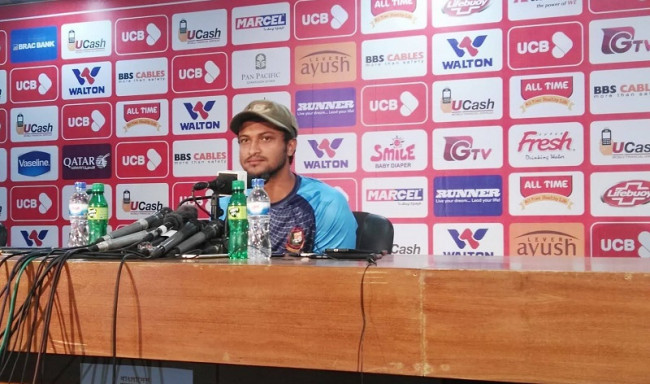 The Tigers opted to play with one-man pace attack against West Indies in the opening Test that earned them a 64-run win over their opponents, in Chittagong.

It is unlikely that they would like to experiment with their bowling attack against the West Indian side when they take on the visitors in the series-deciding second Test match in Dhaka from November 30.

“It (four spinners playing together) was definitely exciting with the kind of bowling partnerships we’ve had. At the same time, I think it was a little challenging as well, because the spinners always prefer bowling big spells, something only Taijul was capable of doing.

“But it was exciting, since everyone was trying to take a wicket or bowl well for the team. And I liked seeing us attacking from both ends. We’ll try to do the same and bowl in partnerships in this Test as well. I think it is important to bowl in partnerships, especially on a wicket that is becoming slower,” Shakib told reporters at the pre-match press conference.

Being a part of the four-pronged spin-attack where the other three spinners are determined to retain their place in the team, Shakib thinks that the competition among them will only make the team better.

“I think it's more challenging than exciting, because [when more spinners play] everyone will try to perform even more. There will be more urges to contribute to the team. I think this would create a good competition inside the team, among the four of us spinners.

“We have two left-arm spinners and two off-spinners, we’ll have a competition between ourselves, which is very good for making the match better,” he said.

Shakib agrees with the popular demand of having a leggie in the lineup as that would have more variety in their spin attack, a missing link for the Tigers since Jubair Hossain failed to cement his place in the team.

“Normally, if there is a leg spinner, then there is more variation. We feel that this is something we lack.

“If we have leg-spinners, then we think it’ll be a bit easier for our batsmen, because then we will be able to prepare ourselves better. We can make batting-friendly wickets too, since leg-spinners can take wickets without having much help from the wicket,” he said.