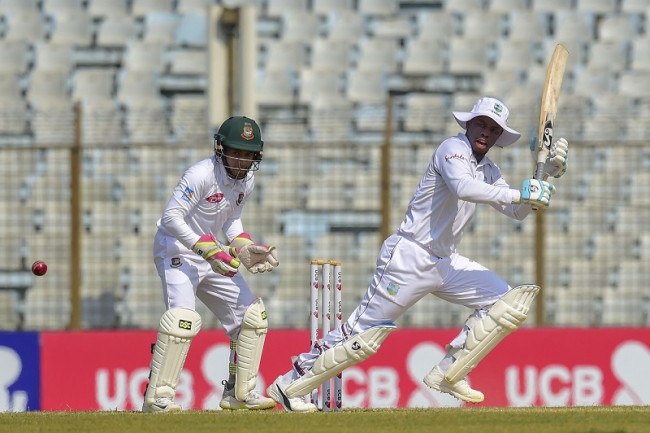 West Indies are on the brink of conceding their first-ever Test series defeat against Bangladesh after 2009, following their 64-run defeat in the first Test in which their shortcomings against quality spin were widely exposed. A similar kind of track is on the cards and it is predicted they would face a similar outcome in the second Test too, which created a huge furor back in the Caribbean Islands.

When West Indies lost to Bangladesh in a series in 2009 in their own den, their first choice players were unavailable due to a pay dispute with the board and that defeat was something that their supporters had accepted. But a Test-defeat against Bangladesh with a full-strength side seemed to be a hard pill for them to swallow. And that defeat in the first Test was also West Indies’s first Test defeat on Bangladeshi soil.

Considering this, it seemed West Indies are under pressure to avoid a whitewash which is a likely result. But West Indies captain Kraigg Brathwaite played down the pressure factor, saying that his side would come all guns blazing to level the series.

“We are not under pressure. We know what we have to do. Obviously we are 1-0 down so we have to look to draw the series. The top five must put on partnerships which will help us winning this last Test,” Brathwaite said on Thursday.

“We are confident. The guys always bounce back well. We have to go out there to fight and stick to our plans.”

The batsman also revealed that they will stick to their plan to expose Bangladesh batsmen with pace.

“There will obviously be a balance. Spin did most of the damage in the first Test but it doesn’t mean pacers can’t take wickets. I think once we could bowl to our plans, we can build pressure and bring wickets. I am backing both spin and pace to do a good job,” he said.