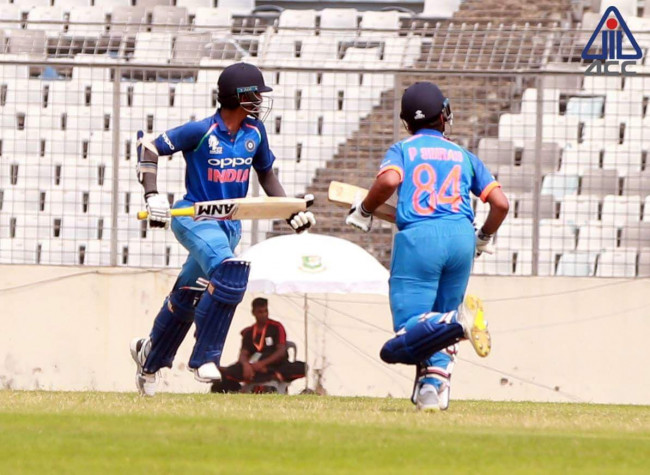 India U19s have won the ACC Under-19 Asia Cup for the record sixth time by defeating the Sri Lanka U19s in the final match of the tournament.

Having opted to bat first, the Indian lads looked comfortable on the crease and dominated their counterparts with some attractive strokes. Mumbai’s youngster Yashaswi Jaiswal was in fine form as the southpaw struck eight boundaries in his innings.

Anuj Rawat and Jaiswal provided a solid base but the middle order proved that they had the mettle to deal with the Srilankan bowlers too. Eventually, Jaiswal top-scored with 85 runs but the team’s skipper, Prabh Simran Singh, played an equally important.

The captain scored 65 runs in 37 deliveries whilst Ayush Badani notched 52 runs. The Indians completly dominated the first half of the match as they scored 304 runs at the loss of only three wickets in 50 overs.

The India U-19 bowlers then returned to dismantle Sri Lanka’s batting lineup. Nishan Madushka looked promising at the beginning but none of their batsmen showed any intent to carry on with the innings.

Delhi-based Harsh Tyagi starred as he notched six wickets and broke the spine of Sri Lanka’s batting-order. Navod Paranavithana tried to restore some parity for the islanders, but he was dismissed by Siddarth Desai after having scored 48 runs.

Nipun Dananjaya’s team were bundled out for 160 runs as they went down without displaying much grit in their chase either. The Indian lads were equally professional in their approach and claimed a comfortable victory in the end.