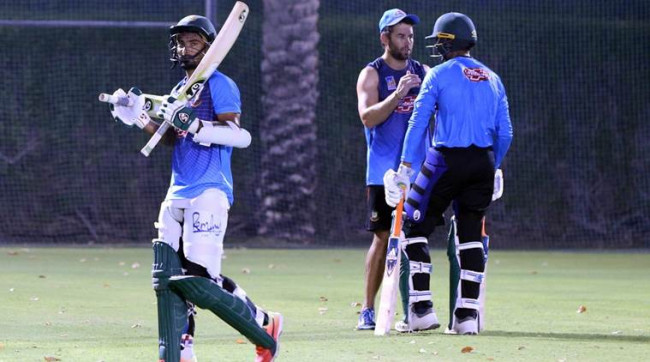 It’s on! The Asia Cup 2018 starts with the toss ahead of its opening game between Bangladesh and Sri Lanka.

Winning the toss Bangladesh have chose to bat first on the batting-friendly track of the Dubai International Stadium.

This is going to be the tenth encounter between these two teams across all formats this year. Both of them had their fair share of heartbreaks and glories over the last nine months and today (September 15) to fight for one of the two Super Four-spots of group B that also has Afghanistan in it.

Liton Das will be the opening partner of Tamim Iqbal in this match. Mohammad Mithun, too, has found a place in the playing XI as the team’s regular batsman Sabbir Rahman is currently serving a six-month international ban handed by the Bangladesh Cricket Board.

Sri Lanka also have made few changes in their last playing eleven that faced South Africa in the recently-concluded series between the two. Amila Aponso, Lasith Malinga, and Dilruwan Perera have replaced Niroshan Dickwella, Lahiru Kumara, Akila Dananjaya in the Sri Lankan team.

Angelo Mathews (Sri Lanka captain): I was going to have a bat first. It looks like a belter. It might slow up and there will be some dew, but you can't control these things. Malinga coming back is great for us. You can always hand the ball to him at crunch moments and tough situations. We just want to carry the momentum in a fresh series and opposition, and we have to assess the wicket well. The heat is terrible, but you can't think of these things. Bangladesh is playing in the same heat, so we've just got to give it our best shot.

Mashrafe Mortaza (Bangladesh Captain): Looks like a good wicket to bat on. Later on the bowlers should get some help from the wicket. There should be a bit of turn later on, so we think it's better to bat first and get a good total. The guys are in form, especially Tamim and the bowlers did really well in the West Indies. Hopefully they will do well here too.