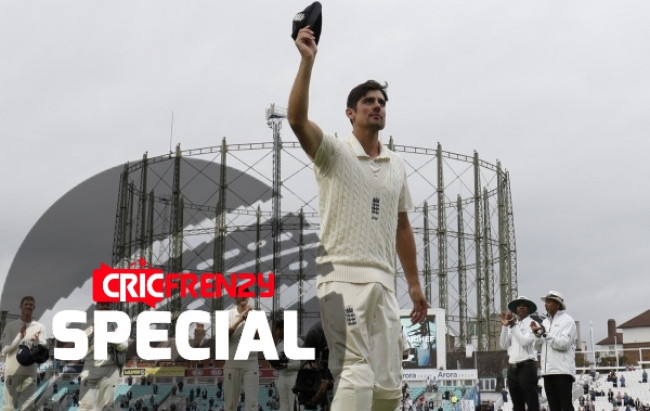 As India embarked on their journey to restrict England to a lowly total after Ravindra Jadeja’s heroics in the first innings of the fifth Test at Oval, they came across a rather familiar, unbreakable block that further crumbled their hopes to recover in the Test match.

Alastair Cook endured a forgettable series against the visiting side, as he found himself struggling while dealing with the guile of Jasprit Bumrah and ferocious out-swingers from Mohammed Shami.

The former England captain finally took a call on his Test career. However, not without one final show of what had taken him to the level he is at now.

Cook is somewhat of an embodiment of strong temperament, resilience and the art of digging out an innings through difficult situations. He might be the epitome of concentration, of the ability to frustrate the bowler with a strong resolute approach on the crease and to later capitalize on the areas where he could milk out the maximum amount of runs.

One could argue that a player who scored 12,254 runs in his Test career might have had relatively wider, various aspects in his game. However, the mere fact that Cook contradicts these prejudiced assumptions and yet managed to churn out and carve his name as one of the modern greats of the game provides a clear testament of the sort of player he has been throughout the course of his career.

What he lacked in terms of variation of shots, he compensated it with mental strength, physical fitness and defensive technique like no one else. Cook had the tendency to spend an immense amount of time on the crease, carefully negotiating the shiny new delivery before gearing up whilst facing the slightly older ball.

Compared to other non-sub continental batsmen, Cook arguably had a better approach towards facing spin bowling. He was quick on his feet, often looking to advance ahead rather than letting the bowler pounce on him through repeated, disciplined bowling. Moreover, it was the resistance that he demonstrated while playing from the back-foot that further made it more difficult to crack his defensive resolve.

Cook judged the length of the ball earlier than most batsmen and played a delightful cut shot that very slickly notched out an opening between two fielders.

The sight of him quickly shifting backward and then correctly judging the perceived bounce, then gradually timing the shot to perfection would absolutely be missed in an English lineup, which would probably be composed with modern aged batsmen who are somewhat driven with constant experimentation to enhance their gameplay and induce flamboyance in their technique.

Quite contrarily, Cook was someone who stuck to the basics and had only two major shots in his armory, of which, he reaped the major benefits. His timing of the shots was flawless, as he tended to always be in control at the crease.

In an era dominated by unorthodox, unique set of batsmen, Cook was a figure who displayed that one could excel in a sport by following its primary rules, that is; determination, tenacity and an incessant spell of concentration.

With the way that each sport and mainly cricket is improving and upgrading from various angles these days, Cook showed the entire world that one could succeed merely by a simple approach, yet an effective one.

I wonder whether we would witness another player with the same class, but until then, we could, of course, acknowledge the brilliant legacy that England’s highest run-scorer is leaving behind him.