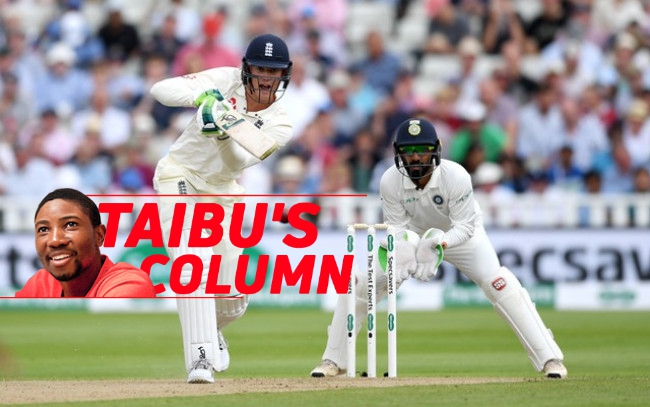 Cricket, in its unique way, has some of the best statements and clichés ranging from the playing field all the way to the hotel. Different countries also have their own such statements, e.g. Australia with their common one around cricketers all over the world, but that’s hardly talked about because of its actual wording which is not easy for a character like myself to repeat. However, For the sake of the reader, I will put my own wording.

“Watch the ball; you can’t hit what you can’t see.”

When it comes to wicket-keeper’s statements and clichés, they seem to be the same in every country with the most common being, “a wicket keeper is the engine of the side.”

When someone is buying a car, he looks at the body, the inside of it, and lastly the engine; hardly does someone look at the engine first. In a country where roads are good and cars are serviced well, the only time the owner of the car looks at the engine is when there is a fault with the car. Wicket-keepers are looked at in the same manner. Last to be looked at, but very important in the whole concept of the game.

Having been a keeper myself, I speak for all wicket-keepers around the globe that the only time that they get attention is when he has made a mistake or mistakes.  An out-fielder can fumble the ball without facing much scrutiny, but not a wicket-keeper. He can be so clean with not conceding a single bye but few to none will pat him on the back and say, “well done mate!” This has become accepted in the world of wicket-keepers that whosoever chooses this role, knows the unappreciated tag which the role brings in a team environment.

No wonder why a lot of wicket-keepers who I have had the privilege of meeting around the world are humble beings. However, this doesn’t stop a wicket-keeper from striving for perfection and constantly looking for an opportunity to change the course of the game or series.

Just like batting, a wicket-keeper has got to get used to the pitch conditions, atmospheric conditions, and ball-behaviour. Yes! Ball! Different countries use different types of balls. In Australia they use the kookaburra, England uses the duke, and the Asian countries mainly use SG.

Generally, Asian wicket-keepers are very good when grabbing low catches and even diving low because of the low-bounce pitch conditions in the sub continent. They also are masters of keeping to spin bowlers due to the amount of time they spend keeping to different top-class spinners.

Australian and South African keepers can bounce on their feet a lot more because of the bounce aka carry that their pitches produce, while English and New Zealand keepers are more watchful following the ball all the way into the hands. They cannot bounce about like the South African or Australian keepers because of the way the ball wobbles after passing the batsman on strike. Western keepers struggle with the spinning conditions in Asia, so does the Asian keepers struggle in western countries.

The difference between the batting and keeping in a national team environment is that there is a technical staff for the team called batting coach, who a batsman can approach when things go wrong. However, a keeper normally finds himself having to work it out himself.

The ones who get out of their comfort zone and speak to opponent keepers and other ex-keepers in that country are the ones that grasp those finer differences which enables them to do well on tour. Picking up a few leaves here and there from others to mix with your own style takes character, but should not take much to try, after all, keepers suffer the same predicament.

“Tell me Tatenda, is Karthik the right height for keeping especially if the bowlers are spraying it both sides of the wicket?” a friend of mine asked over a text message after watching Dinesh karthik concede 11 byes in one of England’s innings. In my humble view, it’s easier being short as a keeper being close to the ground. However, this is no basis to make any judgement about keeping in England. I remember when I first kept at Lords; I conceded 16 byes and got embarrassed by completely missing a ball for 4 byes. Walking in to bat at 5 after we finally got England all-out, I was greeted to the crease by Nasser Hussain who chirped, “He is opening his account on minus 16 gents, let’s make sure he remains in the negative!”

Anyone who has had to play a dual role in a cricket team knows that two roles always complement each other. They pick each other up in confidence or drag each other down in doubts. It is therefore very important to divide attention during practice cleverly.

Jonny Bairstow has kept and batted well, while it has not been the same for Karthik. If India is going to pull this test series back, the engine of the Indian side must start running again.

*[Editor's note: This original article was written after India's defeat against England in the second Test (August 9-13, 2018) at Lord's. Dinesh Karthik then faced the axe and was replaced by debutant Rishabh Pant ahead of the third Test.]