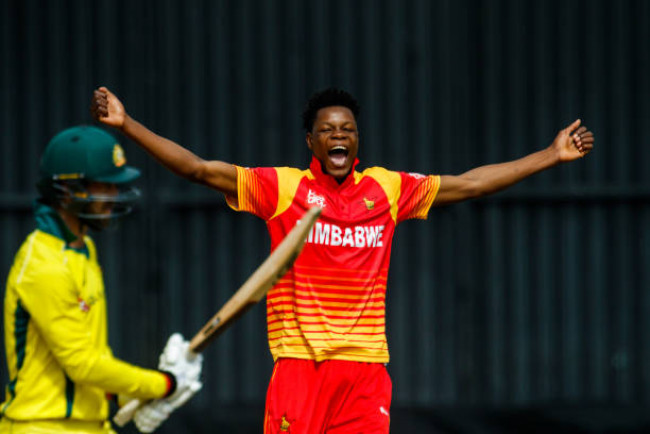 Can Zimbabwe withstand the pressure of franchise based T20 cricket remains a major question to be answered, but indications are there that it won’t be a cakewalk.

The unexpected retirement of Blessing Muzarbani is an evident sign that young cricketers are losing their faith in the board for their long list of wrongdoings.

Currently, the Zimbabwean Cricket Board is receiving financial support from the ICC, as they look to restructure their debt and reduce the expenses. Unfortunately, this means that most of their players and staff would be out of contract from the end of August.

This certainly isn’t an inspiring scenario for any budding cricketer, and hence Blessing Muzarabani, a Zimbabwean fast bowler, has decided to quit international cricket in order to proceed with his career in England. A sound fast bowler who was regarded by many as one of the best upcoming pacers from fringe countries, Muzarabani’s departure from the national stage is a cause of concern and a plight of the Zimbabwe’s cricket board.

Although he hasn’t specified any reason for his decision, it is not difficult to decipher given the state of the board currently.

Muzarabani’s statement read: “I wish my former team-mates and Zimbabwe Cricket all the very best for the future. I have been honoured to represent my country but feel this is an appropriate time for me to pursue other challenges both personally and professionally.”

While it may be a very generic statement, it is quite clear that he is putting the personal interest of him and his family before the idea of representing his country. Muzarabani last played an international game against Pakistan in July, so it is apparent that he has been in the recent plans of the selection committee.

However, as this decision will benefit him on an individual level, it leads us to question the changing dynamics of the game. Cricket has long been overviewed as a sport that displays nationalism to its core.

It unites people of the same country, and these intangibles sum up to amalgamate the beauty of the sport in general. While the T20 leagues are extremely beneficial in promoting young talents (which it surely does), shouldn’t the ICC apply some rules in a bid to draw a proper boundary before it starts affecting the international scenario?

However, the initiation of various T20 leagues around the world has somewhat curbed and minimized the impact of international cricket in smaller countries.

Nations likes Zimbabwe boasted an exciting cricketing talent until a decade ago, but misadministration coupled with corruption in the board and the official authorities have forced the players to seek a different pathway in order to extend and succeed in their playing career.

It is to be noted that players resort to appearing in these T20 leagues as a result of underpayment, or due to the mere fact that they feel that their talents aren’t best utilized while representing the national teams.

As a result, from a personal perspective, it is important for any player to ensure that his and his family’s well-being is taken care of.

Cricketers tend to slow down, and eventually hang their boots in their mid or late thirties. Their personal life is to be looked after, and the peak years of their career is the time when they can stock up resources for the further part of their life when the income would be considerably lesser.

It certainly is not a major issue in countries like India, Australia or England, as these nations relatively pay a wholesome amount to their players; moreover, most of the cricketers from these countries engage themselves in media responsibilities or coaching roles, something that helps them earn a decent living even post their playing days. However, when you take in example a cricket board like that of Zimbabwe, there are glaring problems are deserve to be highlighted as such.

A recent report from the ESPN states that ICC is looking to limit a player’s involvement maximum in three T-20 leagues per year. They would also look to curb the proceedings of these leagues in associate nations, primarily due to the fact that these leagues in smaller countries are managed by third-parties whose main intention differ from developing the sport.

While it is a promising step from the ICC, their actions should not stop at this. They need to understand that plucking corruption out from the cricket boards is equally important if they are to salvage the future of these countries in the international front.

The situation of Zimbabwe’s cricket board wouldn’t have deteriorated to this level had the ICC intervened much earlier. Moreover, the need to differentiate and restrain commercialism from cricket is necessary to ensure a smooth transition for Zimbabwe’s cricketing circuit.

Because, freelance cricket life would be advantageous for the players undergoing difficult periods in the international stage, but it fails to serve the purpose of the sport and merely transforms it into an extravagant bonanza.