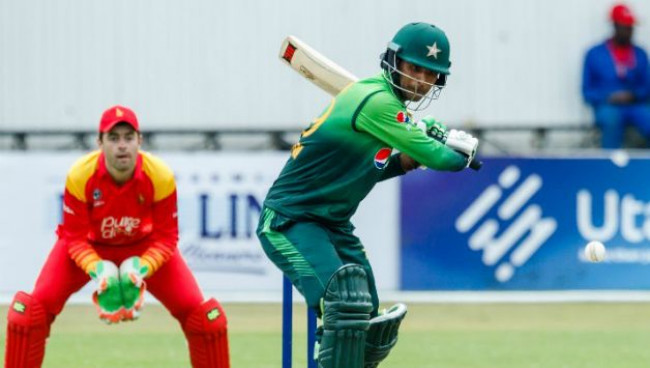 Zimbabwe crumbled, for the fifth time in this series as Pakistan completed their whitewash over a depleted opposition. Pakistan were utterly dominant, and Zimbabwe were equally incompetent throughout the course of the series.

The visitors elected to bat first and thoroughly dismantled the Zimbabwean bowling attack in the fifth and final match of the series. Imam-ul-Haq continued with his sumptuous form, and Fakhar Zaman played another quick, entertaining knock of 85 runs.

Zaman became the fastest batsman to reach 1000 ODI runs. Having reached the milestone in just 18 innings, the Pakistan batsman surpassed the former five record holders who had achieved the feat in 21 ODI innings.

It took Zimbabwe 25 overs to strike the first wicket, as Zaman departed to Liam Roche’s delivery. The struggle continued for Zimbabwe, as Babar Azam combined with Imam to inflict further damage through their sensible approach.

The Zimbabwe bowlers were left clueless as the Pakistani batsmen strolled towards 364 runs with Azam and Imam-ul-haq scoring centuries.

The Zimbabwean innings lacked intent and a purposeful approach, as they failed to rotate strike and were content with bagging the occasional boundary. Hamilton Masakadza and TS Kamunhukamwe steadily initiated the innings, but they were beaten by the ever increasing required run rate.

Zimbabwe batters took a cautious route, as none of them were ready to the take the calculated risk required to chase down the total. Pakistan’s disciplined bowling ensured that they never let the game go off their hands, and in the end, the visitors emerged as the deserved victors.

Mohammed Amir conceded only 19 runs in eight overs, as Ryan Murray top-scored for the hosts with 47 runs next to his name.

Pakistan’s superiority in comparison to Zimbabwe was clearly visible throughout the series. This series might not hold much relevance to their future, difficult endeavors. However, it could serve out to be a great morale-booster for Sarfaraz Ahmed’s side.