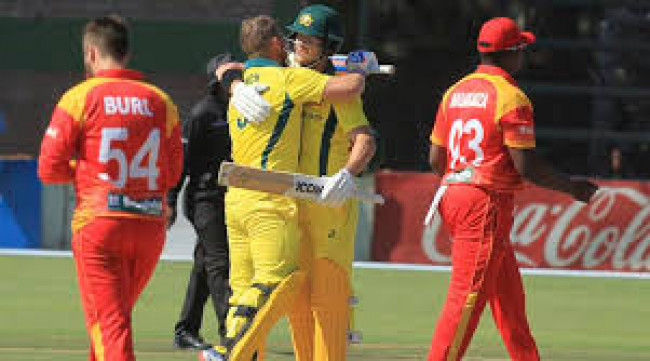 This particular match might not have held much significance in the course of the innings, but surely turned out to be a cracker of a game in the end.

Zimbabwe won the toss and decided to bat first in a decent Harare track. However, they were somewhat overwhelmed by Billy Stanlake’s tight bowling line. Stanlake dismissed opener Cephas Zhuwao and Hamilton Masakadza within the first four overs itself. However, Solomon Mire played a composed knock 63 runs to stabilize the innings, though his strike rate of just over 120 meant that Zimbabwe could never grab a decent hold over the match. Peter Moore decently supported him too, however, none of them could carry their knocks towards the end of the innings. Andrew Tye struck thrice and took crucial wickets of Mire and Elton Chigumbura too.

Australia were set a target of 152 runs, which was a mediocre task considering the vast contrast of the quality of players between both the teams. Aaron Finch bowed out to Wellington Mazakadza quite early too, but Travis Head and Glenn Maxwell combined well enough to see off the middle overs. Blessing Muzarabani took three wickets, as he struck havoc twice after the 15th minute. Maxwell’s inning of 56 runs was well complemented by Head, and later by Marcus Stoinis in the dying embers of the game. The game was sealed by the Australians with a ball to spare, as Zimbabwe’s late surge towards securing a victory saw a dramatic end with Stoinis finishing off the match with a thumping boundary.