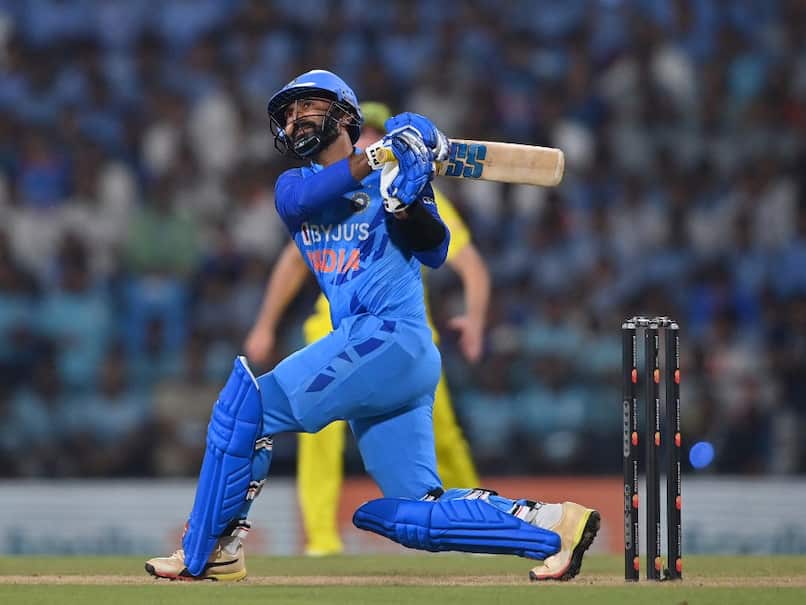 Dinesh Karthik has further elaborated on his designated role as a finisher in the Indian T20I setup, while lauding the ability of skipper Rohit Sharma.

Karthik hit the winning runs for India in the second T20I against Australia in Nagpur, as India romped home to a six-wicket win to level the series.

In a curtailed contest, India were set a total of 91 to chase in 8 overs. Karthik only faced two deliveries in his innings but got the job done for his side. Squaring off against Daniel Sams in the final over, Karthik hit a six and a four to help India chase down the target with four deliveries remaining in the bank.

Karthik has been drafted in as the finisher in the Indian side, a role he has excelled in for India as well his franchise in the IPL. He will be expected to play a similar role in Australia during the ICC Men's T20 World Cup 2022.

Elaborating on the clear mindset he has, Karthik added, "When I get off time, I get a lot of scenario practice. Vikram Rathour and Rahul Dravid have also been accommodating of how I want to practice, and what shots I want to practice. I have been very specific about it, I don't practice too much, I just keep it as specific as possible."

Skipper Rohit Sharma was also at his brutal best in Nagpur, hitting a 20-ball 46* to help India set the pace in the chase. Karthik was left in awe of Sharma's skills, especially his abilities against the pacers.

"Rohit Sharma played brilliantly. I got two balls, so I just tried my best there. To play such shots against the new ball, against top-class new ball bowlers, is not easy.

"It shows why Rohit is such a big player in world cricket, not only Indian cricket. His ability to play against fast-bowling is second to none and that is what makes him truly special," Karthik added.

With the series tied at 1-1, the decider will be played in Hyderabad on Sunday, September 25.