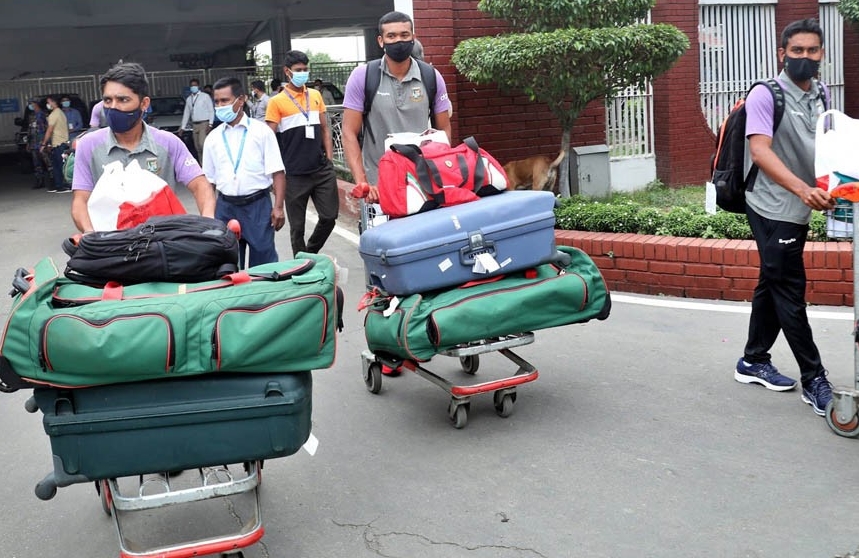 Bangladesh's Test team have returned to Dhaka on Saturday after a 1-1 tie in the two-match series against New Zealand, the Tigers' first-ever Test series draw against the Kiwis.

The 17-men Bangladesh squad, as well as some members of their support personnel, came back on an Emirates flight, which arrived at 5:01 pm at Hazrat Shahjalal International Airport, Dhaka.

Speaking to the media at the airport, captain Mominul Haque said that he has just started thinking about the series ahead.

“None of you expected us to win a Test match there. Still, we’ve won. Now I'm most worried about the next series. There is a lot of good series ahead, we have to play against South Africa-Sri Lanka-West Indies-India.”

Mominul explained the reasons for success in the first Test and failure in the second Test.

"There was no charisma, no magic. We tried to keep our process straight. We have been trying for a long time to play as a team and we've improved ourselves where needed. Bangladesh does well only when they play as a team. Especially in Tests. If one or two perform, it is not possible,” he added.

However, Russell Domingo, Bangladesh's head coach, will not be returning with the team because he is on vacation in South Africa. Ottis Gibson, the pace bowling coach, will not return since he has decided not to extend his contract with the Bangladesh Cricket Board.

By winning the first Test by eight wickets at the Bay Oval in Mount Maunganui on January 5, Mominul Haque and Co. became the first visiting Bangladesh team to win a match against hosts New Zealand in any format of the game. At the Hagley Oval in Christchurch, they lost the following Test match by an innings and 117 runs.

The players will enter the bio-bubble for the Bangladesh Premier League (BPL), which will begin on January 21, after quarantine for a few days.