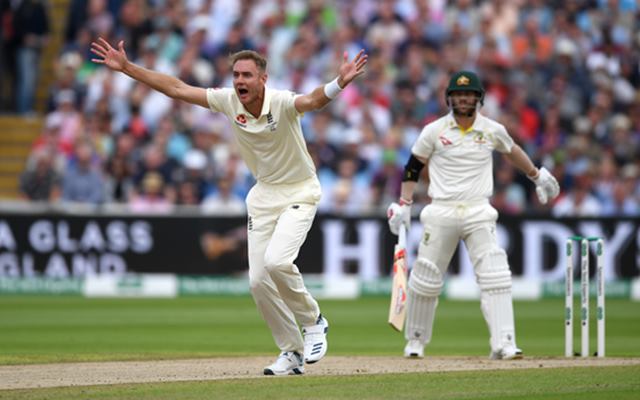 Stuart Broad got his man again -- for the 13th time -- as he helped England fight back against Australia on the opening day of the fourth Ashes Test on Wednesday.

Broad, dismayed at being passed over for two of England's three Test drubbings so far in the series, showed what his team had been missing by snaring his "bunny" David Warner at Sydney Cricket Ground.

Australia, holding an unassailable 3-0 Ashes lead, were in a strong position at 111 for one before losing two late wickets and going to stumps at 126 for three off only 46.5 overs following four rain interruptions.

It was the 13th time in Ashes Tests that Broad had dismissed Warner.

Broad dominated Warner during the 2019 Ashes in England, tormenting the combative Australian opener from around the wicket and dismissing him seven times in the space of 104 balls.

Warner was disappointed by his false shot to get out, but revels in his battles with Broad.

"Today I tried to drive the ball too straight, where the other ones I drove through the covers were a bit squarer.

"But it is awesome just to see Broady back out there. You want to face a world-class bowler and to have him and Jimmy Anderson bowling at us is great."

Like many cricket watchers, Warner is bemused why Broad has not played more in the series, after being surprisingly left out of the opening Test of the series in Brisbane and again for the Melbourne Test which decided the series.

"Jimmy and him would have been disappointed to have missed not bowling together in some of the Test matches, but that's their selection panel," said Warner.

"It's great to come up against the best of England bowlers."

Anderson and Broad have formed a formidable opening bowling partnership for England, but they are well in the twilight of their Test careers.