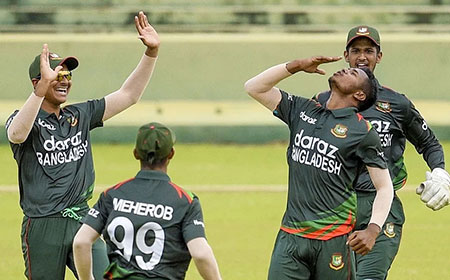 Bangladesh U-19 team won their first match in the tri-nation youth ODI series as the young Tigers chased down the target of 246 with two wickets in hand against India’s U-19 ‘A’, thanks to Mahfijul Islam’ 91-run innings.

Mahfijul and Iftekhar Hossain Ifti made 85 runs partnership in the opening stand at Eden Gardens, Kolkata. Iftekhar returned after playing an innings of 34 runs off 36 balls.

Prantik Nawrose Nabil has given a great support to opener Mahfijul in the third wicket. They both added 79 runs. RS Hangargekar broke the tie by returning Nabil who scored 35 runs.

Despite getting a half century, Mahfijul had to burn with regret of not getting a century for only 9 runs. When the opener returned to the dressing room with 91 runs off 123 balls, Bangladesh camp collapsed a bit.

Middle order batsman Meherob Hasan has dragged Bangladesh form there. Despite losing 8 wickets in the end, Meherob ensured win for the team with 10 balls to spare. Hangargekar took three wickets and Amrit Raj took two wickets for India U-19 'A' team.

Earlier, after losing the toss, India U-19 'A' team was all out for 245 runs. Harnoor Singh has scored the highest 111 runs for the hosts. For Bangladesh, Tanzim Hasan Sakib took three wickets and Ashikur Zaman, Mushfiq Hasan and Rakibul Hasan took two wickets each.