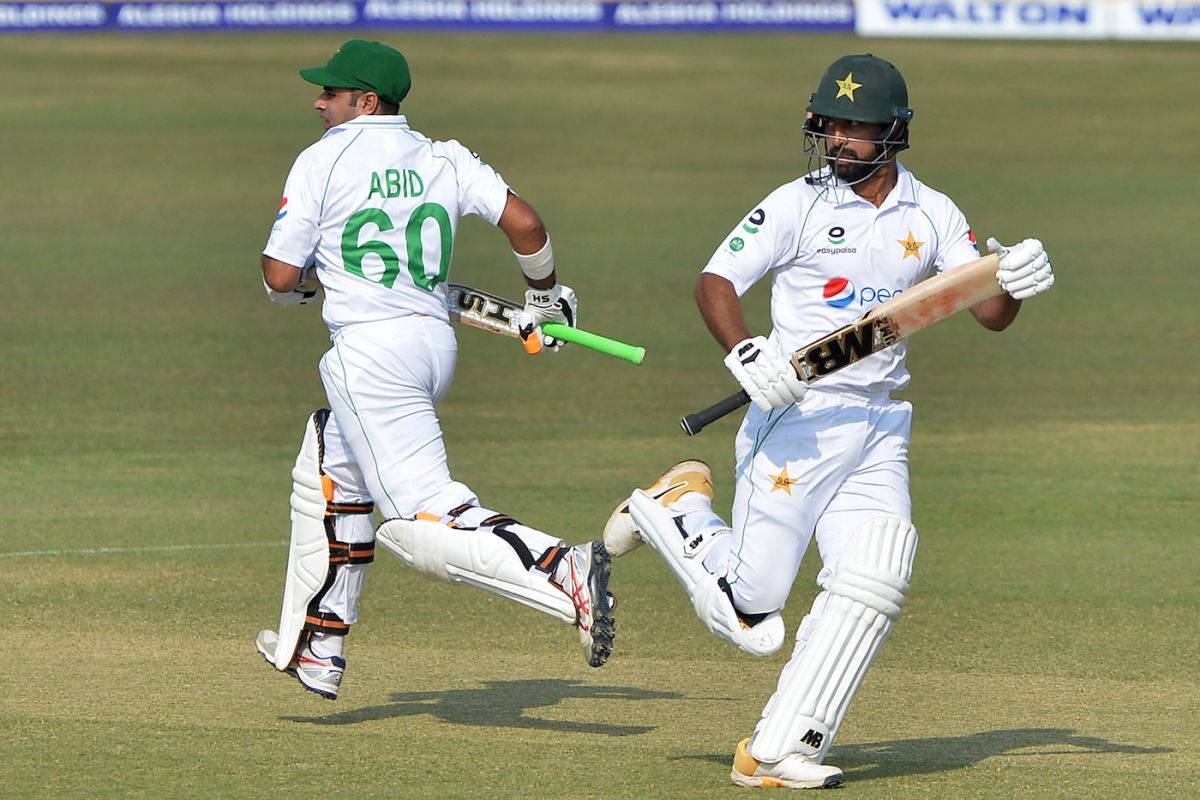 Pakistan have scored 145 runs without losing any wickets at stumps in reply to Bangladesh’s 330 on Day 2 during their first Test at the Zahur Ahmed Chowdhury Stadium, Chattogram.

Abid and Safique were batting on 93 and 52 respectively at the end of the day's play.

Bangladesh bowlers spend wicketless sessions throughout the day as the openers played cautiously to put on a 145-run opening stand for the visitors. Pakistan faced 85 overs, trail by 185 runs at the end.

Bangladesh's only chance came in the 13th over, when Taijul Islam appealed for a leg-before decision, but it appeared to be all bat as Shafique tried to push the ball off the back foot. Taijul was unable to persuade his captain to take a review, but replays proved that the ball had touched Shafique on the pad first.

The visitors got off to a positive start as they removed overnight batter Liton Das and debutant Yasir Ali (4) early on the second day which put the Tigers on the back foot.

Hasan finished with 5-51 while Faheem Ashraf and Shaheen Afridi complemented with 2-54 and 2-70 respectively, helping Pakistan bowl out Bangladesh on 330.

Earlier, resuming at 253-4, Bangladesh managed to add 77 runs for the loss of six wickets before going to Lunch. Their innings came to an end with Hasan removing Ebadot Hossain on the first ball, claiming his five-wicket haul.

Hasan Ali trapped the right-hander Liton into LBW, however, the umpire gave not out but Pakistan decided to review, which later showed that the ball would have hit the leg stump. Liton departed on 114 off 233 balls, added only one run into his account on Day 2.

Mushfiqur Rahim failed to get to his eighth Test ton as Pakistan made a roaring comeback in the first session. He had to depart on 91. This is the fourth time that Mushfiqur was dismissed in the nineties in Tests, most by Bangladeshi batters in the format.

Only Mehidy Hasan Miraz came in handy as he was unbeaten on 38 off 68 with six fours.

On Friday, opting to bat first Bangladesh found themselves all at sea at 49 for 4 but Liton’s maiden ton and Mushfiqur’s 82 amassed an unbeaten 204-run partnership which resurrected the hosts as they ended the first day on 253-4.