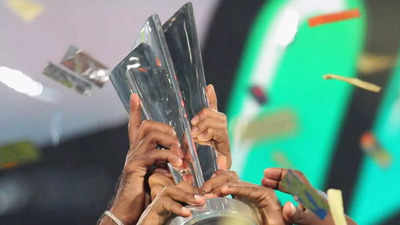 It's a far cry from Lord's, the MCG and Eden Gardens, but the modest Al Amerat ground, 15km to the south-east of the Omani capital of Muscat, will on Sunday briefly become the beating heart of international cricket as the T20 World Cup gets underway.

"How often does an Associate nation get to host a World Cup?" Pankaj Khimji, the chief executive of Oman Cricket told cricinfo.com.

"I'm told by Star Sports (the host broadcasters) that this might turn out to be the third-largest televised sporting event of all time, potentially reaching an audience of 3 to 3.5 billion people.

"Even if Oman gets a billion people watching the first six games, and showcases itself just to the Indian subcontinent, it's massive."

The grass pitches of the 3,000-seat Al Amerat site are a long way from the days when cricket was first played in the sultanate, often on waste ground by teams hastily assembled from visiting navy ships.

Oman are playing in the T20 World Cup for the second time after a 2016 debut saw them stun Ireland at spectacular Dharamsala.

Ranked 18 in the world, they have to negotiate a qualifying round which includes Bangladesh, Papua New Guinea and Scotland to get into the Super 12 which is being played exclusively in Dubai, Abu Dhabi and Sharjah.

Even if only six first round games are staged in Oman, the stakes are high.

As well as the prestige of being in the mix with the likes of India and Pakistan, making the second stage will give Oman a place in the 2022 T20 World Cup.

The team is coached by former Sri Lanka Test skipper Duleep Mendis while the 15-man squad is made up almost entirely of expatriates with Sufyan Mehmood the only Oman-born player.

They are also semi-professional which means many will train at 5:30 in the morning, put in a full day's work and return for more cricket in the cooler evening temperatures.

Oman's recent cricket history has been a roller-coaster ride -- they were playing in Division 5 of the ICC World Cricket League as recently as 2016.

They achieved ODI status in 2019 but were the last team to make sure of a spot in the T20 World Cup which was chased out of Australia and then India by Covid-19.

To secure their place, they defeated Hong Kong by 12 runs in a sudden-death play-off, defending only 134.

In six years of playing international T20s, Oman have lost 19 of 36 matches -- two wins over Ireland punctuated by a home defeat to Qatar in February 2020.

Against Scotland in a home ODI in 2019, they were bowled out for just 24 with six of their batsmen dismissed without scoring.

Oman have also failed to escape controversy with former player Yousuf Abdulrahim Al-Balushi banned for seven years by the ICC in 2020 on four counts of corruption.

Despite those highs and lows, Oman have a core of dependable match-winners who will be key if they are to be one of the teams from their pool to make the latter stages of the World Cup.

Aqib Ilyas has struck two centuries and six fifties in his international career while Jatinder Singh is Oman's top scorer in the format with 697 runs.

Left-arm seamer Bilal Khan, meanwhile, has 51 wickets at an average of just over 16.