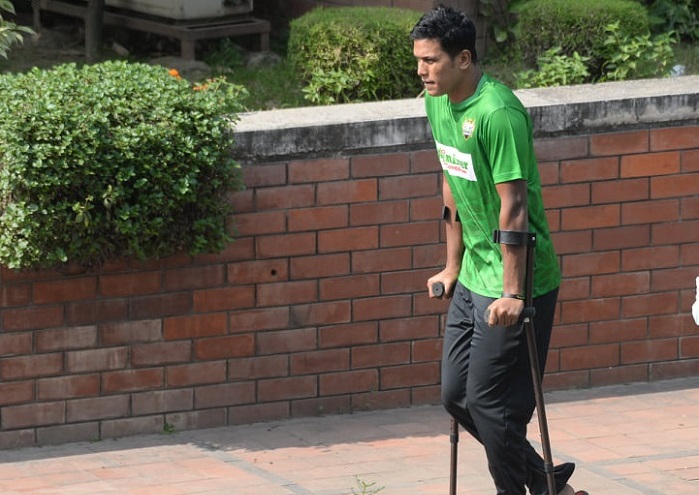 Bangladesh pace bowler Mohammad Saifuddin indicated that he had played in the just concluded Bangabandhu T20 Cup with an ankle injury for Minister Group Rajshahi as he could not do the MRI as it would have broken the bio-bubble.

Saifuddin hurt his left ankle while playing football during the training session in Mirpur that forced him to miss couple of matches for Rajshahi in the competition.

However, Saifuddin was brought back in the midst of the tournament, but according to the all-rounder it seems he had played the tournament carrying an injury that forced him to restart his rehabilitation following completing his stint in the competition.

‘’We couldn't do an MRI when we were in the bubble, so we did the MRI when the tournament was over and found some problems in the ligament. I felt that if the injury were typical, then it would have gone within a week, but still, there was some problem. Since there is some ligament problem, I am working according to the instructions of Debashish Sir, the physio, Baijid bhai, and Shaon Bhai,’’ Saifuddin told reporters on Wednesday.

‘’I don't know whether my ligament injury falls in the grade 1 or grade 2 category, but there is some problem, so I will have to be under their supervision for three weeks,’’ he said.

‘’At that time, I did the rehab for two weeks, and that is why I felt good and did well in the nets. But there was confusion since I could not do the MRI. So after doing the MRI, I understood that there was something wrong,’’ he said adding that he is optimistic to be available against West Indies.

‘’Yes. I am optimistic (regarding being available against West Indies). I will have to give some bowling, running and overall fitness test. I will get the clearance if I can endure those (fitness) tests,’’ he said adding that he is confident that he can survive on his variations without bowling over 140 KMP.

‘’I cannot ball at a speed of 140-150 km like Pat Cummins, Starch, or Bumrah because we are not physically strong. But I try to ball at a rate of 130-132-135 km by bringing variations, whether it is a new ball or a slug one. Sometimes I succeed, and sometimes I don't, but I always keep trying, and my captain tries to lift me,’’ he added.