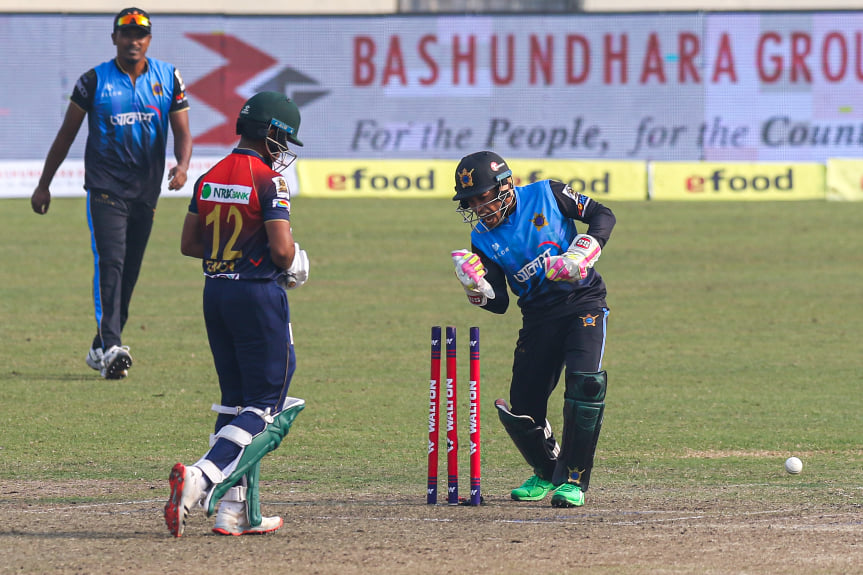 Dhaka had shown their character as they successfully defended 150 to seal the match and now Mushfiqur Rahim’s side will face the losing team from the Qualifier 2 match between Gazi Group Chattogram and Gemcon Khulna.

However the highlight of the match was the behavior of ill tempered Mushfiqur Rahim as his gesture with Nasum Ahmed was surely disgraceful considering it was nothing short grace. The wicket-keeper batsman was found throwing shadow punches towards his teammate Nasum Ahmed, with whom he collided while trying to take the catch of Afif Hosaain who was looking menacing but went out after scoring 55 runs of 35 balls.

Both Nasim and Mushfiq went for the catch, which Afif spooned behind the wicket and both the fielders ran after the ball which was ultimately grabbed by Mushfiq who narrowly avoided the collision and became furious towards his teammate.

Batting first, Dhaka did not have the idea start as they lost the last match centurion Naim Sheikh on 5. Sabbir and Al-Amin also gone cheaply as Dhaka were reduced to 22 for 3 in the powerplay. Then skipper Mushfiqur Rahim came to the rescue with 43 runs knock. After his departurew, Yasir Ali then anchored the innings scoring 54 off 43 balls. Later Akbar Ali’s unbeaten cameo knock of 21 powered Dhaka to a fighting total of 150 for 8. Mehidy and Rabbi picked up 2 wickets each for Barishal.

In reply, Barishal never looked comfortable from the start as Dhaka bowler maintained a disciplined display. Apart from Afif Hossain no other batsmen were able to take on the bowlers as they struggled for runs. Afif scored 55 off 35 balls but it was not enough as Barishal were restricted to 141 for 9 in 20 overs. Muktar and Shafiqur both grabbed 3 wickets each for Dhaka.

Winning captain Mushfiqur said that he is happy to move into the eliminator.

‘’Yes I thought it would be great for wicket batting. When we lost two or three wickets, it was understood that the wicket has a turn, there is a swing. But when you do well without losing the wicket, the wicket will feel flat. So I don't want to complain about the wicket. The goal we have set is to say good score. We know it's a knock-out game, there will be pressure when you get down to chase the run,’’ said Mushfiqur after the match.

‘’Our goal was to get Tamim back quickly because their middle order was inexperienced. I think Rabbi batted well, Akbar made a small cameo, and we have to give credit to our bowlers for the win,’’ he said,

‘’I'm really disappointed with the fielding. But it is part of the game. But the positive side is that the bowlers have always created opportunities to defend this small goal. I think we have good confidence for tomorrow's match. Hopefully we will come up with some good plans that can be implemented in the field in the first 6 overs In sha Allah,’’ he said.

‘’Alhamdulillah. Everything is fine. Despite the victory, we have more room for improvement as individuals and as a team. So there is another match tomorrow, I hope I will win, let's see I hope I can play as a team,’’ he added