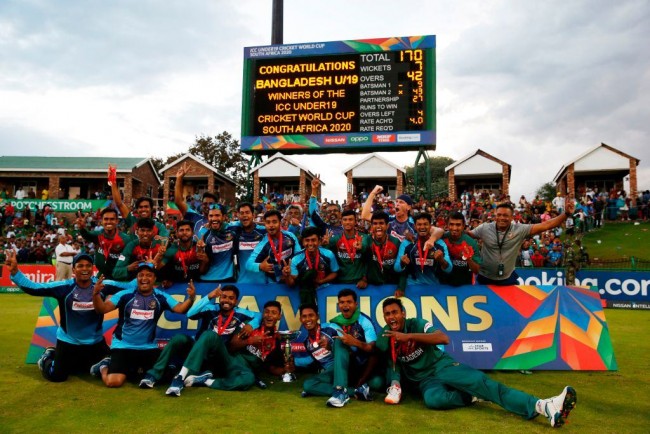 There was no fireworks around, there was no official rally to pay the tribute to the Under-19 heroes, who lifted the ICC Under-19 World Cup trophy, beating mighty India by three wickets but still the nation exalted for the big occasion.

In what was their first appearance in the final in 22-year history in Under-19 World Cup, Bangladesh earned a landmark win by stunning red-hot favourite India, a nation that won the trophy four times.

Accolades started pouring on the young Tigers right after they achieved the victory and the social platform was crammed by acknowledging what was considered as a great victory.

But the victory that made the nation proud didn’t come by chance. Rather it was a systematic process, which began two years ago and finally it paid rich dividends. That also showed how a methodical process could work like wonder.

In the last two years, Bangladesh played many nerve-wracking matches and came short on most of the occasions but that proved to be a huge learning curve. And when another nervy moment came in the way, they didn’t falter, particularly for their experience to handle such sort of situation.

Under tremendous pressure, skipper Akbar Ali himself led the side from the front with a serene but heroic 43 not out, which helped Bangladesh clinch the low-scoring thriller.

Despite their heroic performance all around the world in the last two years, a trophy eluded Bangladesh for most of the time, vastly due to the India who beat them in tri-nation tournament final in England and Asia Cup. On both occasions, Bangladesh was too close to win the final but eventually failed to beat the nervy moment to be denied for the trophy.

But when it mattered most, Bangladesh didn’t find it a new thing in the book as Akbar held the nerve in an adrenaline-pumping moment to gift the nation the most prized trophy.

"It's a dream come true. It's all about the hard work we have done over the last two years. The coaching staff...I just cannot thank them enough for how much support they have given us on and off the field,” Akbar said after clinching the historic final.

“Some of our bowlers were getting emotional. What happened should not have happened. I would like to congratulate the Indian players. They have been brilliant throughout this tournament. I would like to thank our coach, assistant coaches, trainers, analyst, selectors, everybody who has helped us. We've had a very good experience, and this is just the beginning for us. Hopefully, this will be the starting stone for us. Those who have supported us here have been our 12th man here. We really appreciate it."

Like Akbar, opener Parvez Hossain Emon’s 47 was too crucial in winning the game. Emon was injured and retired hurt on 25. But when Bangladesh reduced to 106-6 and when it looked, Indians were all set to take the game away, Emon came to the crease and played through the enormous pain to share a little but crucial 37-run partnership with Akbar. This partnership eventually proved to be key in helping Bangladesh win the trophy.

Akbar also paid rich tribute to Emon’s courageous effort, saying it showed how desperate they were to win the trophy.

“We never gave up the hopes. We want to clinch it in any way. That’s why Emon came to the crease even though he felt enormous pain. That showed our character and defined what we are,” he added.

Meanwhile, the credit obviously should go to the bowlers for their effort to bundle India out for paltry 177, said Akbar.

“They were outstanding. Our fielding and catching was also outstanding. It’s a credit for the bowlers to restrict a mighty batting line up like India under 200,” he remarked.