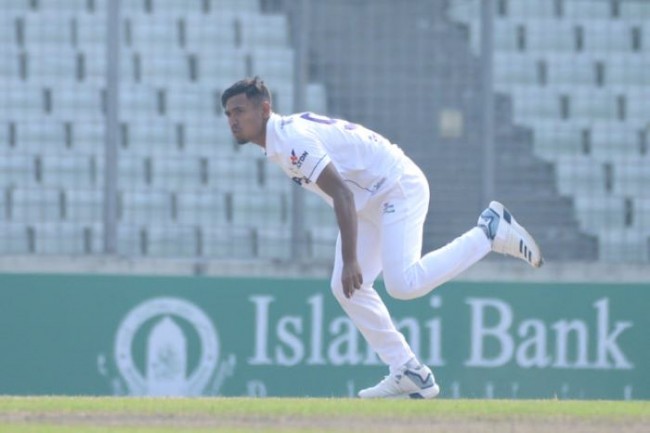 Habibul Bashar Sumon, the selector of the Bangladesh Cricket Board (BCB) said that the fast bowler Mustafizur Rahman needs to improve his red-ball cricket skill in a bid to make him available for the Test squad.

Adorably called as ‘The Fizz’, Mustafizur Rahman has recently been axed from the Pakistan-bound Bangladesh Test team, vastly due to his poor form in the longer version format. This was notably the first time since his landmark debut in 2015, Mustafizur was dropped from the team for his performance.

But the selector, Habibul Bashar Sumon, was reluctant to say it as ‘drop’ rather he insisted Mustafizur was given time to hone his Test bowling skill by playing in the ongoing Bangladesh Cricket League (BCL).

“I won’t say he is dropped, I won’t also say he is rested. But since a first class tournament is going, we think he could do some work here to rectify his mistakes. I hope he will make a good comeback,” Bashar said on Sunday.

“We have no concern with Mustafizur. A player can’t be in form always. Recently his form may not be the up to the mark but I always say he is special bowler for us. He has enough times and I think if he gives him some times and does his work properly, he will make good comeback. He is very important bowler for Bangladesh,” he added.

Bashar continued: “Therefore we gave him the time to improve his bowling. First class cricket is going on. We think the BCL is the best possible platform for him to get him back to the form.”

Mustafizur who is playing for Walton Central Zone, went wicket-less in the ongoing first round match against Islami Bank East Zone in the first innings in which Tamim Iqbal scored a triple century. He bowled 25 overs and leaked 106 runs.

He was the part of Bangladesh’s squad in the two-match Test series against India but his performance was such bad in the T20 series that the team management couldn’t rely on him for the Test series and thereby he couldn’t make the cut in any of the Test match.

He subsequently was dropped for the Test series against Pakistan, paving the way for Rubel Hossain to comeback in longer version format.

“There might be question about Rubel’s Test bowling average but he has been bowling really well of late. We have been seeing a different Rubel. He has done well in first class cricket,” Bashar said.

“Rubel has been bowling well in BCL also. He has been taking wickets regularly. As I said earlier, Mustafizur is very important bowler but we want to see his red ball from. In fact we have included the players in the squad who are in form right at the moment,” Bashar concluded.