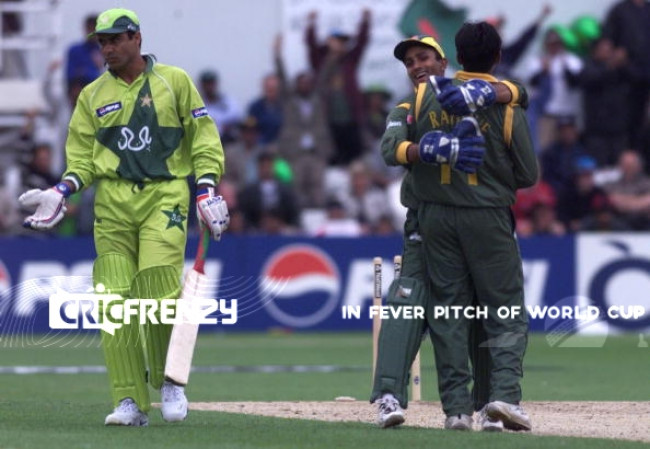 Bangladesh registered 11 matches so far after playing 33 matches over the past five World Cup appearances (1999-2015). There was some breathtaking victories to go with some disappointing losses but that they ended up winning three matches in past three events in a row, spoke a volume of how they found the cricket’s biggest carnival to their likings. With another World Cup approaching closer, the Cricfrenzy will take you down to the lane of the memory of Bangladesh’s past five World Cups. Here’s the first installment.

The passion was palpable on the eve of Bangladesh’s first World Cup journey in 1999. A long dream to play the cricket’s biggest extravaganza was materialized after winning the ICC Trophy 1997. The expectation was not high apart from demanding some spirited cricket from Bangladesh. It’s indeed a case of watching and learning. And coming to participate in the cricket’s biggest carnival for the first time, Bangladesh’s intention was to enjoy their game to the fullest.

There was just one realistic hope that they can beat Scotland, an associate nation like them in that World Cup. Apart from winning against Scotland, Bangladesh, by their own admission didn’t even imagine in their wildest dream that they would end up winning two matches, including Pakistan, the eventual runners-up of that edition.

Bangladesh played five matches in their first World Cup appearances and ended up it finally with two wins. Minhajul Abedin Nannu, the current chief selector of the country, was clearly the best performer for Bangladesh in that World Cup. Playing just four matches, he scored highest 140 with two half-centuries-a match winning 68 not out against Scotland and a valiant 53 not out against Australia.

With bowling he also took four wickets. Nannu, whereas, even was not in the initial World Cup squad despite being considered as the best player of the country during that time. His omission from the squad created a huge outrage all over the country, and the public outcry forced the then BCB president Saber Hossain Chowdhury abolish the selection panel to return Nannu into the fold at the expense of Jahangir Alam. And he made it a fairytale.

The start in the world’s biggest event was disappointing one but not surprising at all. They lost their first match to New Zealand by six wickets after being bowled out for 116 runs in 37.4 overs. Bangladesh knew they would lose the match but the expectation was to pile up some more runs on the board, which was not to be.

Bangladesh did well to some extent in batting against West Indies in their second game of that World Cup, compiling 182 before being all out in 49.2 overs. West Indies won the match by seven wickets, having gone past Bangladesh’s total in 46.3 overs.

Three days after losing that match, then came the game that Bangladesh targeted. Since both of the sides were ICC associate nation that time, the battle between Bangladesh and Scotland was termed the battle of minnows.

The first ever victory came against Scotland thanks to a breathtaking performance from Minhajul Abedin Nannu who showed his worth, playing the match winning 68 runs not out against Scotland. The 68 not out innings was particularly significant because of Bangladesh being reduced to 26-5 in a clash of minnows.

Scotland was equally favourite to win the game, considering the English condition would suite them more than Bangladesh. Nannu, promoted up in the batting order, propelled Bangladesh to 185-9 from that disastrous start. It was not score that could guarantee them a victory but when Bangladesh reduced Scotland for 9-3, there was sense of belief.

As usual Scotland’s Yorkshire all-rounder Gavin Hamilton was obliged to take responsibility for seeing Scotland through, but a cruel run out was his undoing, and with him went Scotland’s chances. Bangladesh won the match by 22 runs to seal its maiden victory in its maiden World Cup

Bangladesh played their fourth match against Australia and lost it by seven wickets.

However the watershed moment of the country’s cricket history came on May 31, 1999 at Northampton. They beat Pakistan by 42 runs to create a history. A victory against Scotland made Bangladesh’s first ever World Cup successful one and there was no demand from them but Bangladesh cricketers perhaps vowed to give it a fairytale finish.

The performance was the epochal moment in their pursuit of getting the coveted Test status.

Acknowledging the victory, famed as cricket Bible, Wisden noted, “Nothing diminished the Bangladeshi fans’ euphoria. It was the greatest day in their cricketing history, and perhaps no event since independence had united the country with such delight.”

Khaled Mahmud Sujon’s all-round performance gave the talismanic impetus as he scored 27 and took 3-31 to seal a massive 62-run win. Akram Khan was the top scorer with 42 as Bangladesh managed 223-9 what was their first 200 plus score in the World Cup. Pakistan was bowled 161 in 44.3 overs and Bangladesh completed its memorable victory.

As Bangladesh raised the hope of an unexpected victory, one would have mistakenly believed the venue of the match was Dhaka instead of a neutral territory. They surprised themselves, most certainly, as they played their best cricket of the season at a time when their application for Test match status was going to be a major talking point at the International Cricket Council (ICC) meeting one month later.

The performance is believed to hasten Bangladesh’s way to attain Test status, earlier than anticipation.

Appreciating their landmark performances, the cricketers however were given hero’s welcome upon their return to the country from England.