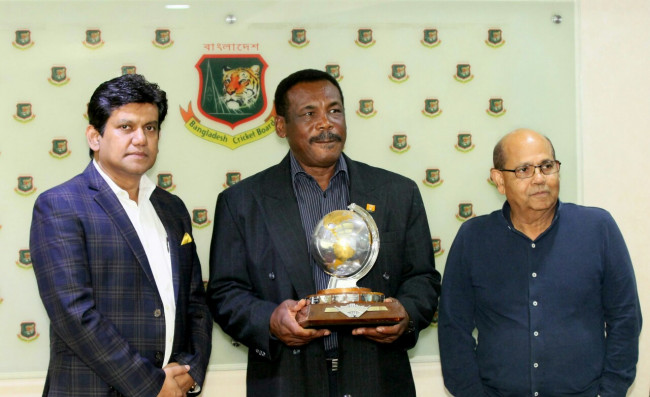 Greenidge is visiting the Bangladesh to promote a golf tournament but even during the party he hardly left without talking about cricket, more precisely about the chances of host in the global tournament.

“Of course I hope Bangladesh does well,’’ Greenidge told reporters ahead of the campaign on Thursday.

‘’It could at this stage be anyone’s game. There are no dominant favourite that I would say are grand favourites to win the tournament. If Bangladesh play well, they could upset a lot of teams,’’ he said.

“Bangladesh are like the West Indies and Pakistan. They play grand cricket one day and another day not so good cricket. So hopefully they will be consistent through the whole tournament,” he said.

Greenidge, who coached Bangladesh through the ICC Trophy in 1997 -- a campaign which ensured qualification for their first-ever World Cup, feels that consistency will be key as the format have changed as all the teams play each other in the group phase of the tournament unlike the past when two teams advanced from each group.

“The format this year is a little different than other years and there is a lot of cricket to be played. I think the team that is most stable or consistent will do well.,” he added.

“I would like to see a more balanced tournament where each team is fighting to gain that extra point.

‘’As a spectator, you want to see entertaining games and I hope the players do provide that for everybody coming to watch.

“I would like to see Bangladesh do well. I have always looked out for Bangladesh even when I wasn’t here.

As I said, there are no clear-cut team that I think can win the World Cup.