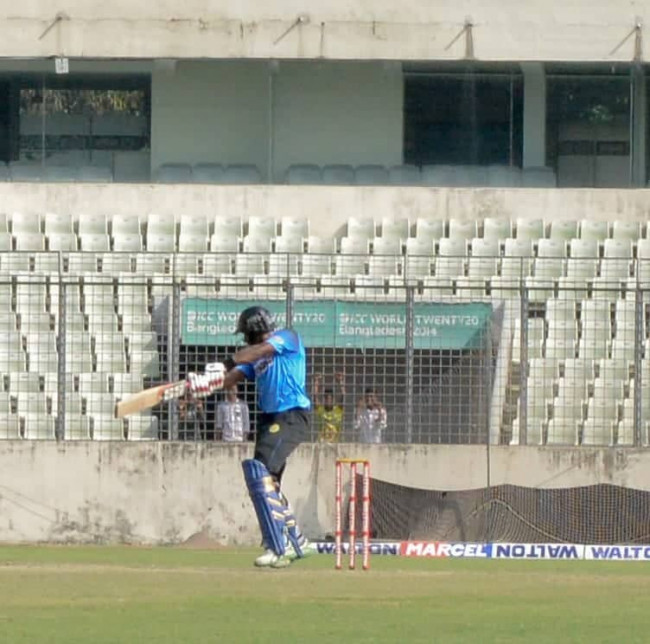 In a match that was important to tighten the noose in the point table, Abahani were reduced to 23-3 after which Jahurul played the match-defining knock, keeping the form that made him obvious amongst a star-studded side.

His fellow opener Soumya Sarkar continued his poor form being out on 10 while Nazmul Hossain Shanto and Indian recruit Priank Kirit Panchal were dismissed before making any runs.

Pacer Abu Jayed Rahi and Farhad Reza were in their destructive best at this point but Jahurul serenely dealt with the threat of the duo. And in the process, he got support in Mohammad Mithun with whom he shared 53-run for the fourth wicket stand to steady the innings.

Mithun failed to convert his innings to big one as he was removed for 40 off 48, smashing three fours and two sixes. Sabbir Rahman made 24 and skipper Mosaddek Hossain scored just two, leaving Abahani at jittery 135-6.

Abahani’s chance looked slim at that point until Mohammad Saifuddin came up with handy support. Jahurul and Saifuddin combined for a 92-run partnership in an undefeated seventh wicket stand to sail the side home.

Saifuddin was unbeaten on 55 off 69, sending the ball across the rope for seven times. Jahurul struck 10 fours in an innings of 127 ball-91 not out.

“As an inform player, onus was on me to take the side home. I am happy to do what I need to do at the moment when the team was in precarious state,” said Jahurul, who had already scored two centuries and two 90 plus knock for Abahani in this league.

Despite a poor return in batting, Soumya showed his bowling prowess, claiming 4-34 for Abahani which was catalyst in restricting Prime Doleshwar’s mighty batting line up to just 224 after they were put into bat first. Mashrafe Bin Mortza bagged 2-48 while Saifuddin, Mehidy Hasan Miraj and Sabbir Rahman picked up one wicket apiece.

Farhad Hossain was the top-scorer for Prime Doleshwar with 47. Taibur Rahman made 41 while Marshall Ayub added 40.

Farhad and Marshall paved the platform of propelling the side past 200 after their top order failed to make impact. Doleswahr’s inform batsman Saad Nasim got a start but failed to carry one, being dismissed for 34.

Abahani stayed on top after this victory in the big match as they acquired 16 points from nine matches. Legends of Rupganj also have 16 points from same number of matches but they are behind to Abahani by virtue of net-run-rate.