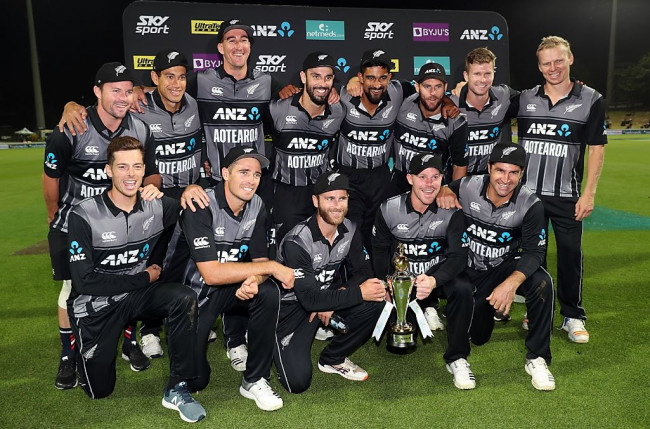 ছবি : New Zealand pose with the winners' trophy in Hamilton on Sunday

Colin Munro's blazing 72 and Tim Southee's last over help New Zealand to seal the T20 series 2-1 with a four-run-win over India in the final T20Is in Hamilton on Sunday.

In replying of the hosts’ 212 for 4, India scored 208 for 6. Dinesh Karthik along with Krunal Pandya collected 32 but Tim Southee restricted the duo to 11 in the last over. The man in blue once again failed to get a T20 series win over Kiwis as well as the defeat ended their unbeaten run in T20 after 10 series win.

Earlier, winning the toss, Rohit Sharma decided to bowl first but the two Kiwis opener Tim Seifert and Colin Monro smashed a 80-run partnership that proved the decision wrong for the visitors. Kuldeep Yadav sent Seifert back for his 43 off 25 balls. Then, Kane Williamson added 27 runs before his departure. Colin de Grandhomme also scored a quick 30 off 16 deliveries. But Monro was still unstoppable and score 72 off 40 balls included five fours and five sixes.  Daryl Mitchell and Ross Taylor remained unbeaten with respectively 19 and 14 runs. Kuldeep claimed 2 for 26.

However, with the target of 213, the visitors get an early blow when Shikhar Dhawan returned for 5 runs. Rohit Sharma took the charge along with Vijay Shankar in the 2nd-stand. The pair added 75 runs before Vijay was removed by Santner for 43 runs. Then Rishabh Pant for 28, Rohit for 38 and Hardik Pandya for 21 and MS Dhoni for 2 returned to the pavilion.  In the sixth-stand Dinesh Karthik and Krunal Pandya added 63 runs and created a chance for India. But Tim Southee held the nerve in the last over and restricted the duo to 11 of the 16-needed. Dinesh Karthik and Krunal Pandya were unbeaten on respectively 33 and 26 runs. India were ended on 208 for six. Santner and Mitchell claimed two wickets each.

New Zealand next to host Bangladesh in a series of three ODIs and three Tests which will kick off on February 13.