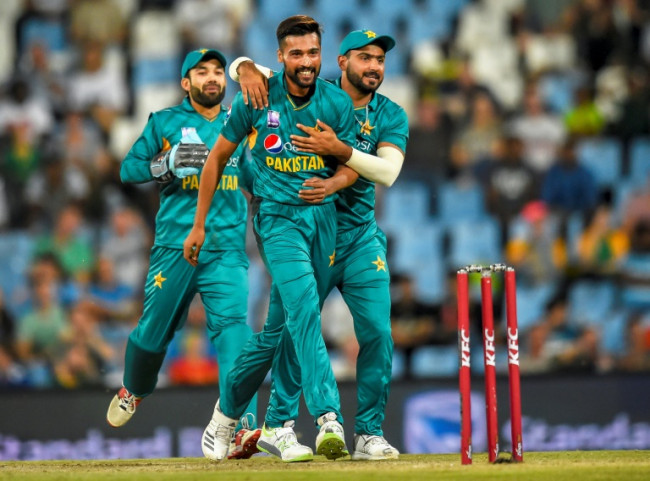 ছবি : Pakistan finished their tour of South Africa with a 27-run win in the third and final T20 on Wednesday. -AFP

Pakistan ended their difficult tour of South Africa with a win in the third T20I on Thursday at Centurion. The visitors avoid a second whitewash across three formats and a first T20I clean sweep in over three years. A clinical bowling performance handed them a comfortable 27-run win against the Proteas.

Pakistan set a 169-target for the hosts who selected to field first after winning the toss. Pakistan posted 168 for 9 in 20 overs. After, Reeza Hendricks smashed a boundary to begin the chase of 169 for South Africa. But left-arm spinner Imad Wasim and left-arm fast bowler Shaheen Shah Afridi restricted the Proteas to 30 for two in the first seven overs. Hendricks (5) was sent back by Shaheen Shah Afridi while Imad Wasim took Janneman Malan (2).

After then, Rassie van der Dussen (41) and Heinrich Klaasen (2) struggled to find the boundary despite the field restrictions as the hosts made only 24 in the powerplay. But Klaasen's misery was ended by Mohammad Amir. Then, David Miller (13) started off in fine fashion by picking up a couple of boundaries off the same over post Klaasen's wicket. But Shadab Khan stopped him and sent him back to the pavilion. Van der Dussen became the first victim of Faheem Ashraf.

Babar Azam (23) gave a rocky start for Pakistan. But South Africa managed to end his stay immediately. Fakhar Zaman (17) and Mohammad Rizwan (26) then took over the charge but in the final over of the powerplay, Beuran Hendricks sent back Zaman.

Shoaib Malik (18) and Mohammad Rizwan then steadied the ship. Lutho Sipamla ended Rizwan and Malik got catastrophic run out that slow Pakistan’s speed. But Imad (19) and Asif Ali (25) gave Pakistan hope and remained the key during the slog overs. The hosts South Africa comeback with a strong effort as Hendricks managed to wipe out the lower order. Only Shadab remained unbeaten with his 22 of 8 for the visitors.